The high velocities that are common during initial activation of an irrigation cycle could cause the Flow-Clik to sense a “high flow” situation (primarily due to air trapped within the system) and subsequently shut down the irrigation system at the beginning of every cycle. The Flow-Clik addresses the problem by providing a programmable Startup Delay to allow the system to stabilize prior to the Flow-Clik monitoring for high flow conditions. To program the Startup Delay, turn the dial on the left side of the Interface Box to one of the eight preset delay positions from 20 seconds to 300 seconds. 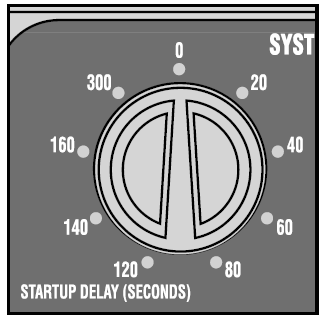 Note: The 0 second delay position is used for calibration of the Flow-Clik during initial installation only.