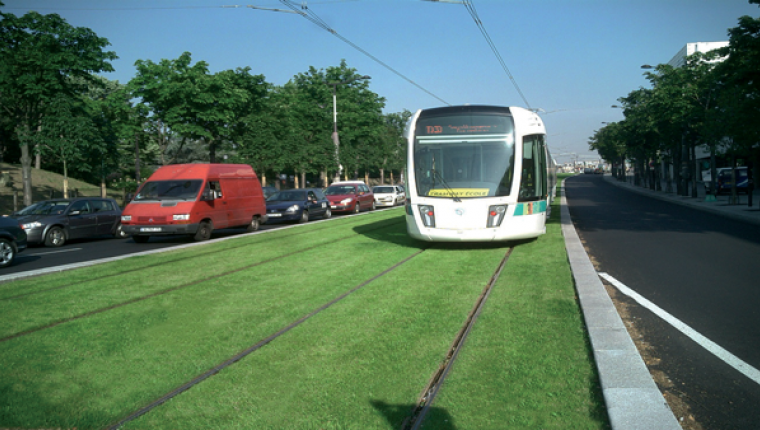 In Europe, a handful of metropolitan areas are leading the way with public transit projects that are making their cities green, rather than gray. In France and Spain, new train lines have been installed that are beautifying cities by creating greenbelts, rather than taking them away. By installing turf between and surrounding the actual train lines, these cities are not only solving traffic congestion, but also (thanks to the turf ) solving noise pollution and making the landscape look a whole lot nicer. In 2006, the first new tramway to be built in central Paris for more than 60 years began operation. An eight-kilometre line, running through the 13th, 14th, and 15th arrondissements south of the River Seine, the Tramway de Marechaux Sud (TMS) links the Pont de Garigliano on the city's western edge with the Porte d'Ivry to the southeast. The TMS is the result of the growing need to increase public transportation capacity in Paris. But, the city leaders did not merely want to build rail lines and stations; they wanted to create something that would help improve the surroundings. Thus, the TMS is just one part—albeit a major one—of Paris Mayor Bernard Delanoe’s traffic-busting, anti-pollution promise to “green” transport in the French capital, and also reduce the noise levels associated with traditional gravel and concrete rail lines.

In keeping with the green theme, the TMS system (which runs along— not above—Boulevards des Maréchaux) features electrified green-and- white tram cars and a complementary greenbelt with widened sidewalks for pedestrians, paths for cyclists, and more than a thousand newly-planted trees. In all, there is more than 36,000 m2 of landscaped area. The end result has been not only an improvement in city surroundings and aesthetics, but also a marked amount of noise reduction and improved traffic flow. 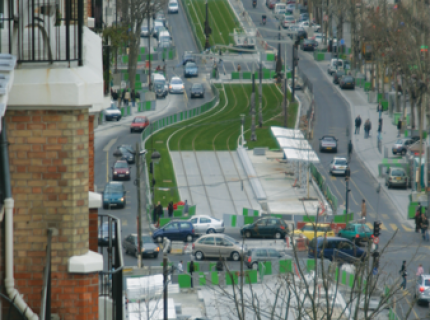 According to the Board of Independent Parisian Transportation (RATP): “Particular attention was paid to durable and long- lasting urban development such as the installation of automatic irrigation systems.”

When it came to irrigation, reliable products were must and water conservation features were of utmost importance. Hunter irrigation products were the preference of the project’s architect, J.F.L. CONCEPT of Athis Mons. That desire was echoed by the contractors who won the bid on the project— Société EGM (overall bid for entire tramway job), and Société IDFA and Société CCA Perrot (each won bids for part of the irrigation).

Construction began in Summer 2004 with the irrigation installation and in Spring 2005 the grass was planted. High-quality Hunter 7.5 cm Pro-Spray® (with Pro-Spray nozzles 10H and 12F) was the primary choice along much of the greenbelt, but Hunter 5 cm SRS sprays were installed to address the needs of areas with short soil depth.To meet the challenge of water conservation the heads included HCV check valves and to handle high water pressure issues, each zone included a (40 mm) 11⁄2" Hunter ICV valve with Accu-SetTM pressure regulator. 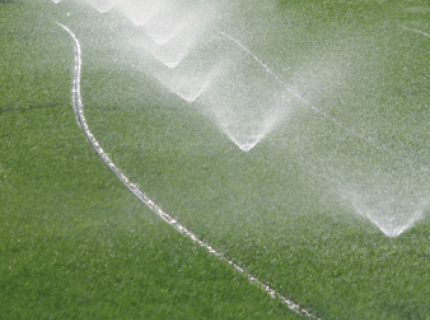 Two other French tramway systems are also adding turf to their lines as in Paris. In Le Mans, they are using Hunter 5 cm Pro-Spray (with Pro-Spray Nozzles), (50 mm) 2" ICV with Accu-Sync, and HCV. The tramway of Marseille has installed Hunter (30 cm) 12" cm Pro-Spray, AFB bubbler nozzles, and (40 mm) 11⁄2" ICV.

In addition, Tram Baix in Barcelona, Spain is a public transportation system that features more than 8 km of turf surface. The lines are double rail (go and return) with a width of 12 m that is planted with grass. The irrigation system includes PGP® rotors (with purple cover to indicate recycled water use) and square pattern spacing (face-to-face) of 12 m. The future of mass transit in European cities is looking greener and quieter. 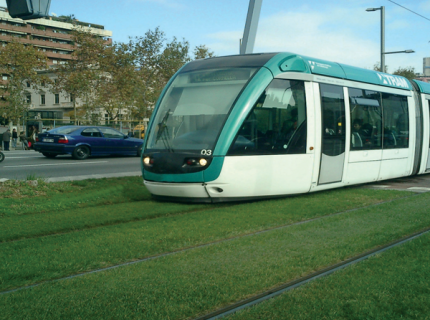 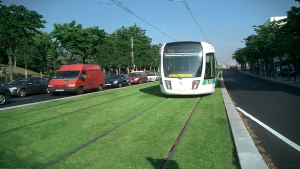