The Benefits of Pressure Regulated Sprays

If you live in an area with high water pressure, you’ve seen it. Spray sprinklers supplying the neighborhood with a fine, misty fog. The sound is similar to what you hear when you pull a nail out of your tire—hissing, but at a much higher decibel level. You’ve seen it so often that you think it’s normal, and since the landscape is getting wet, all must be good. In all likelihood however, that cloud of mist is the ghost of money and resource wasted. Sprays that look and sound like this are using a lot more water than needed  each time they run, and depending on how they are scheduled the waste can be enormous for just one property. Multiply that by an entire neighborhood and it becomes a monumental waste of water. 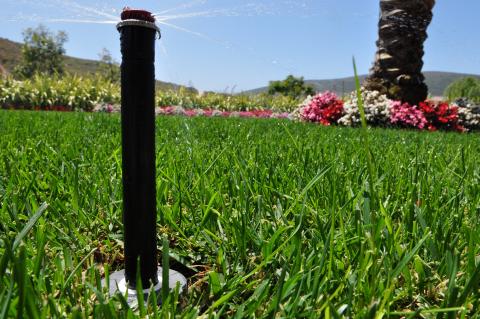 We hear it all the time from irrigation professionals that call into our technical service line, “The spray zones at the Jones’ house have a lot of dry spots”. The technician then asks for a pressure reading and generally gets a response something like this: “Oh, we have plenty of pressure”. Pressure is the #1 culprit when it comes to wasting water, whether it is too low of an operating pressure, or too high. Either one leads to wasted water, but the majority of instances the pressure is just too high. It leads to misting, evaporation, wind drift, and poor uniformity, which usually leads someone increase the run time to battle the dry areas, wasting even more water.

When it comes to spray head nozzles, most are designed to operate at 30 PSI. Almost all manufacturers show this on their performance charts as the recommended operating pressure, with a 10 PSI window in either direction as the limits of the chart and thus the operating range. Rotating Stream nozzles are designed to operate most efficiently at 40 PSI, with a slightly larger operating range, generally about 15 PSI in either direction. When you start using either of these products outside their upper boundaries shown on their performance charts, you begin to start seeing the poor performance mentioned earlier, poor results in your landscape, and on the water bill. It also means that each head on the zone is putting out more water. On a 15-foot, half-circle nozzle running at 50 PSI, compared to the optimal 30 PSI, it will flow over one-half of a gallon per minute more. Multiply that by a run time of 10 minutes, and that one sprinkler flows five gallons more than it needs to each time the zone turns on. Since it is applying the water much less uniformly as well, most of that extra water is not doing what is intended.

Let’s look at a typical example of a 10-head spray zone with four quarter-circle sprinklers and six half-circle sprinklers. Running at 30 PSI would put the flow at about 15 gallons per minute, and if it ran at 50 PSI, the flow would be over 19 gallons per minute. That might not sound like much, but if that zone runs two 10-minute cycles per day, three days per week, it adds up to over 260 gallons per week of unintended watering. Over a 28-week irrigation season, you could see over 7 thousand gallons of water wasted. That’s enough to haunt you, but consider that this is only one sprinkler zone on one irrigation system, and you start to realize that over-pressured spray heads can be huge water-wasters.

So if you are in an area with high pressures, what are you supposed to do? You have some options, but the first thing you’ll want to find out is the pressure you currently have in your system. There are pressure reading devices that can attach to a hose bib or others that attach directly to the spray head.  The latter devices allow you to remove a nozzle to put a tee with a pressure gauge in its place to check the pressure right at an operating sprinkler. You can always call the water utility if you are on the municipal service, but they can only give you the pressure at the street. It’s much handier to know what the sprinkler actually has for an operating pressure, as this is the pressure that is relevant to the recommended operating pressure. Once you’ve determined the pressure, you’ll need to decide if you want to regulate the entire system upstream from the valves using an inline pressure regulator, regulate at selected valves with a regulator attached to the valve, or replace spray head bodies with pressure regulating style bodies. There are also some manufacturers that have pressure compensating devices that attach below the nozzle, but these do not regulate the pressure, and may not give you the desired results. Installing a whole-system regulator can be expensive, and it may be that you don’t want the entire system to have the reduced pressure. Regulating at the valve can be a simple alternative if the valves you have in your system have a means to install a device in the field. Adding spray head bodies with built-in regulation to an existing system can be a simple, cost-effective solution especially if the heads you currently have in the ground have a pressure-regulating counterpart so you only have to replace the internal portion of the sprinkler. Regulating at the head offers the advantage of ensuring that all your sprinklers are operating at the same pressure, which is particularly important in sprays because of the narrow desired operating range for the nozzles. Of course on new installations, adding pressure regulating sprays makes a lot of sense in areas with high static pressure. For the small additional cost, you get a better system overall, and the payback in water savings can happen quickly.

You may be thinking, “Why shouldn’t I use pressure regulated spray bodies on every system?” The answer is, maybe you should. If you are in an area with high pressures, it can be a good practice. If you determine they are needed during the system design phase, be sure they are used during installation.

When performing service on an existing system, be sure to check and see what type of spray bodies are installed, so that if you need to replace a head, you use the same style for the replacement. Also, checking all the sprays on each zone is a good practice to be sure no one has inadvertently replaced a pressure regulating model with a standard model.

We know that if water pressure is too high it can have an adverse effect on sprinkler performance, and operating sprinklers at the correct pressure gives you a better chance for efficient operation of an irrigation system. You also must know the system pressure to help troubleshoot problem areas and determine what to do about various system issues. It’s also a good idea to check older systems to see if perhaps the pressure has changed. Sometimes water utilities will boost the pressure to help in one area, but can have an effect on a different area they service. Pressure regulated spray bodies can be a great solution in areas where they are needed and can help to save a huge amount of water. They should be considered on all new installations, and looked at as an upgrade to older systems when it’s time to replace sprinklers.