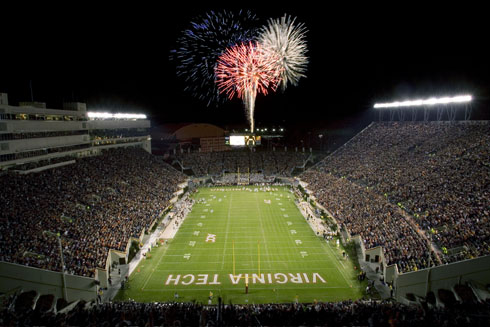 The traditional method of installing the grass on a collegiate or professional football field has long been the same. Bring in roll after roll of specially grown turf and place them down in much the same manner as one would install rolls of carpet in their home. Then, allow the rolls to take root into the ground and blend themselves into one seamless surface.

At Lane Stadium at Virginia Tech University in Blacksburg, Virginia, they’ve decided to do things a little bit differently.

Lane Stadium, home of the Hokies, earned the distinction of becoming the first collegiate football facility in the nation to install an Integrated Turf Management (ITM) system. The innovative system – the brainchild of Green Tech, Inc. of Richmond, Virginia – features trays of natural turf positioned above asphalt. The result is a playing field that can be drained, dried and moved.

The Lane Stadium project also proved to be the first time an ITM system was installed with underground irrigation. At all other sites where trays were used, large volume irrigation was selected, with powerful above-ground heads spraying huge amounts of water over extremely large areas of coverage. These heads do get the job of watering done, but without the precision and efficiency of Hunter rotors. And without the safety, as well.

Project designer/builder Fritz Ballard and his crew from Ballard Sports of Cary, North Carolina made Hunter I-40 rotors their sprinklers of choice. “We wanted something that would give more effective coverage than Big Guns®,” said Ballard, whose firm worked in tandem with the general contractor Delhi, New York-based Clark Companies (Clark had experience with an ITM installation at Giants Stadium in New Jersey). “And, believe it or not, our first choice of rotor also proved to be the only brand of rotor that would fit correctly within the confines of the ITM system.” 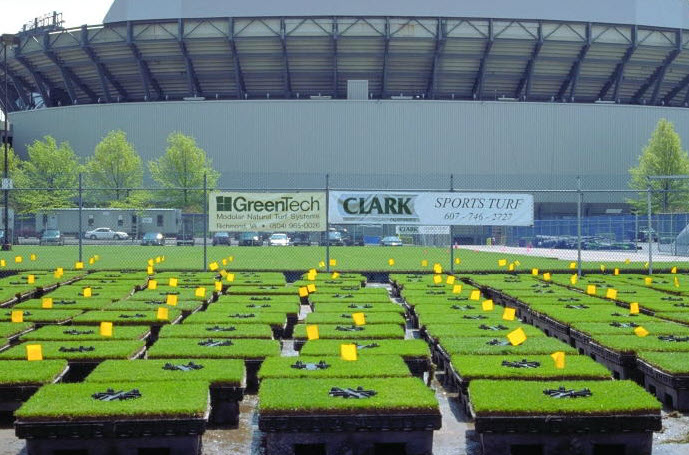 Ballard chose Hunter I-40s not only for their superior performance and durability, but also because of their ‘friendliness’ to athletes. “Thanks to the ProTech™ safety system (featuring a heavy-duty rubber cover and boot with the smallest exposed surface area of any rotor in its class), the I-40 reduces the possibility of contact with players. It’s a friendlier rotor,” said Ballard.

In all, (40) I-40 and (14) I-20 rotors were installed on the Lane Stadium playing surface, with several dozen more installed on the adjacent practice fields, which also feature the ITM system. Keeping the sideline areas lush and green are 40 Institutional Spray sprinklers. A 16-station ICC controller oversees irrigation of the main field while a second 16-station ICC commands the practice facility's (79) I-40 and (29) I-25 heads. A mix of 1 1/2" and 2" versions of the hard-working ICV valves have been installed throughout.

Once the system was in place, the grounds crew also added the new Hunter ICR long-range remote control to make maintenance and servicing of the entire irrigation system as easy as possible. With an operating range of up to two miles, and the ability to access a multiple of systems, the ICR is the ideal accessory for a facility as expansive as a collegiate football complex. The irrigation system also includes a Hunter Mini-Weather Station, which incorporates rain, freeze and wind sensors “all-in-one.”

Virginia Tech became the nation’s first university to install the system, inspired by the success of ITM at Giants Stadium in East Rutherford, New Jersey, home to two 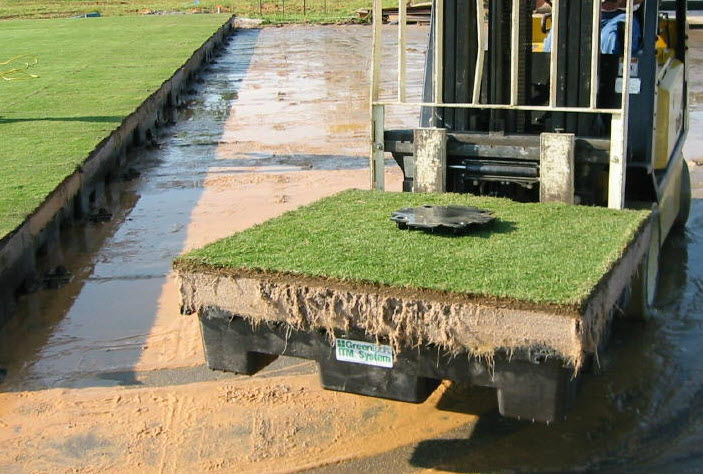 National Football League teams and a Major League Soccer franchise. In addition to pro sports, that facility also hosts numerous concerts throughout the year. The ITM system allows the playing surface to be removed for these heavy traffic events and then reinstalled quickly, keeping the turf in peak condition at all times.

At Virginia Tech, non-sports use of the facility was not the issue. Yet, the grounds crew and coaching staff at the school still saw the benefits of installing the ITM system. One of the prime reasons was the easy way worn portions of the field could be replaced.

In football, the areas between the “hash marks” in the “red zone” typically wear out faster than anywhere else. The middle of the field from the 20-yard-line to the goal line can easily become nothing more than dirt after a season of play. With the ITM system, the trays that receive more use during a game can simply be removed and switched with trays closer to the sidelines that typically see little or no action. By rotating the trays after games, all parts of the turf can get equal use by season’s end, ensuring a field of uniform quality.

A second reason to go with the ITM system was that the ability to remove sections of the field would provide an advantage with the stadium’s south end zone expansion project. “At some point during construction, large cranes will have to be brought in to lift large, pre-cast supports into place as the stands are being built,” said Ballard. “Without trays, a new playing field, irrigation and drainage system would be damaged by the cranes. That would be money out the window.”

Virginia Tech’s old artificial turf surface was replaced with a 6" stone layer covered by precision-layered asphalt to eliminate any imperfections and ensure a level surface. Then, a total of 4,600 4' x 4' trays were placed on pedestals two to three inches above the asphalt base. 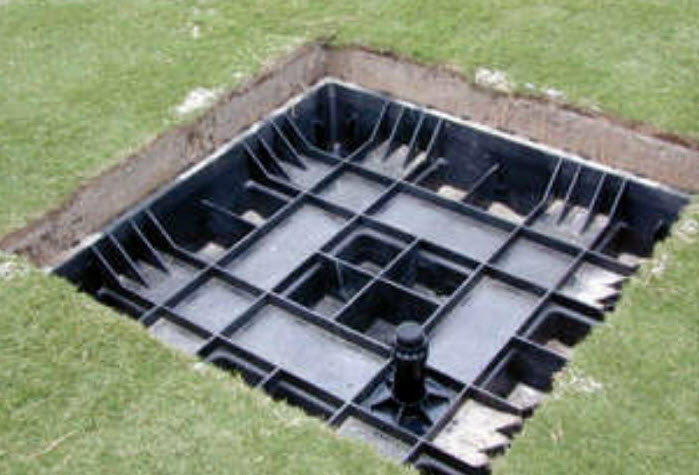 A guide system with foot locator pads helps ensure each tray’s proper position. Tray walls fold down to join neighboring turf section and create a tight fit. The channels under each tray act as conduits for both a climate-control system that creates the ideal growing conditions, and for a vacuum system connecting 22 air vents that draws water from the trays and then flows into large drains on either side of the field.

For turf replacement, transportability and the cost savings over typical methods of re-sodding, nothing beats the ITM system (that’s not even mentioning the ability to achieve increased revenue by bringing in events to a venue where a typical field would run the risk of turf damage).

And for attaining the best performance, the best coverage and the best fit (remember, it’s the only brand that’s designed to work with “trays”) with the ITM system, nothing beats Hunter. 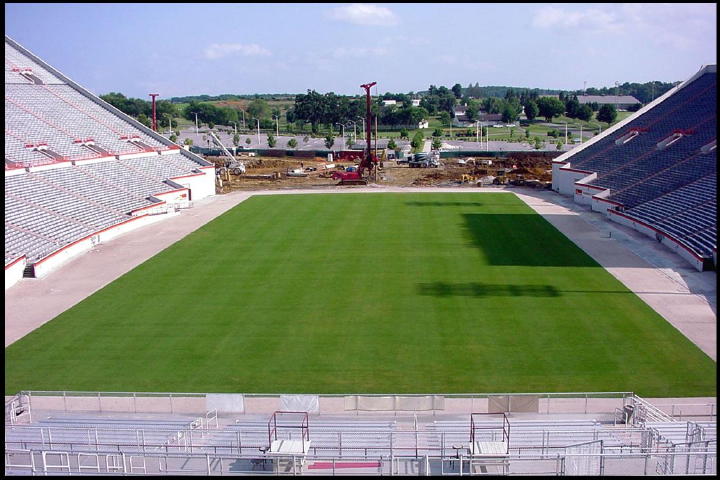