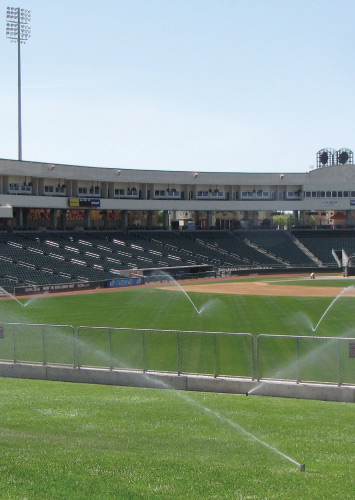 "We spent $15,000 and it saved $55,000," says Grounds Manager Chris Ralston of the IMMS-ET at his baseball stadium in Lake Elsinore, CA. Now with the Sacramento River Cats, the AAA team for the Oakland Athletics, Ralston is making sure the capital city sees the same kind of savings.

Ralston needs a good system: In Sacramento, he has 82 irrigation zones, including turf, rosebeds, shrubbery, and trees. His four-employee operation (plus 20 seasonal workers) has to keep everything green for the 72 home games plus numerous concerts and events that the stadium hosts. So simplicity is key, and Ralston relies on the IMMS-ET.

"I think the best feature is the fact that it has an ET sensor on it," says Ralston. With IMMS-ET, everything is on-site and acts as a weather station.

Ralston explains the system's ease of use was a factor in his purchase decision.

"We have five clocks on site and it puts all five on them on one screen. I pick the start time and the computer does everything for me," he says. "I double check it, but the fact that it hasn't failed me, the grass is green and I'm saving 15 to 20 percent on water use means it's hard to go wrong."