The Interface Box offers nine pre-selected off times from 5 to 60 minutes that are programmable by a single rotary switch. To set the Interrupt Period, turn the dial on the right of the Interface Box to the desired period of time you would like the Flow-Clik to keep the system off after a high flow condition has occurred before continuing to irrigate. 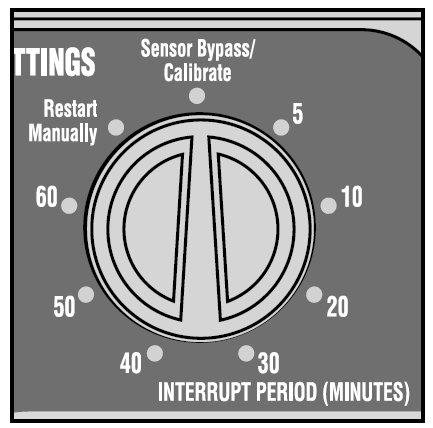 Example: A system that is mostly spray zones set for 10 minute run times could select a delay of 10 minutes so the system is only off during the operation if a single zone.

A manual restart feature is also provided. If the dial is set to the Restart Manually position, and an over flow condition is detected by the Flow-Clik, irrigation will not resume until the system has been manually reset.

To manually restart the system after an overflow condition has occurred:

Press the Restart System button once on the Interface Box. The System Status indicator light will change from red to green or flashing green (if flow is occurring).

The Sensor Bypass setting allows the user to manually override the Flow-Clik sensor. This is helpful during situations that require the system to operate at higher than “learned” flow rates (i.e. system winterization, running a hose bib, or operating multiple valves).