All because of a winning double play combination of the right turf for the environment and the right rotors.

The city of Surprise, Arizona may be little but it sure thinks big, like building one of the most ambitious pro baseball training sites to date and incorporating it into what will eventually become the city center of the growing Phoenix suburb.

Tucked into a 200-acre municipal center is the spring-training home for not one but two teams, the Texas Rangers and the Kansas City Royals, complete with a state-of-the-art stadium and 14 practice fields. Surrounding the sports facility are 57 acres of parks, a five-acre lake, an aquatic center, a library and city administrative offices — all totaling a cool $62 million. 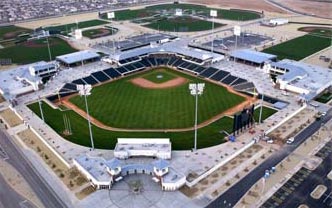 Right off the bat, one can see that the size of this site would be demanding on an irrigation system. It would have to be comprehensive enough to handle a variety of turf and landscaped areas, and efficient enough to conserve water. Throw in curve balls like constant use of the venues and the high ET rate of a desert landscape and you’ve got a challenge.

That’s why civil engineer Charlotte Engineering Sports Group, of Phoenix, drafted Hunter to keep all the turf and landscapes in top condition. From the I-40 rotors that put down water fast, to the Genesis central control system, this all-Hunter system is an all-star lineup.

"Hunter seems to be the manufacturer of choice of pro baseball," says Bill McBride, senior designer at Charlotte Engineering.

Build It and They Will Come Close

The Surprise sports facility is an upscale, 10,500-seat stadium/amphitheater built to promote what spring training is all about: feeling close to the players and to the game. For example, fans enter through center field instead of behind home plate, and the batting cages and hitting tunnels are fan accessible. Individual seats and outfield berms for sun lovers are also featured.

Other amenities include a sophisticated playing field that recovers quickly after heavy stress and rainfall. It includes an extensive subsurface drainage system, a thick gravel blanket over the entire field, special root-zone soil and an advanced hybrid bermudagrass.

After spring training ends for the season, fun on the fields continues day and night with college games, camps, fall ball and more. In fact, there is only about two weekends per year when the fields aren’t in use.

Therefore, the job for the Hunter system is two-pronged: to water as close to ET as possible — up to 2-1/2" of water per week — in the short windows of time available. Over the entire site, including the network of parks, about half a million gallons need to be put down daily.

"We wanted to be careful and conserve water by using only what is necessary to support the facility," says McBride.

At the top of the order is the Genesis central control system with an ET weather station, central computer, hardwire-connected field satellites, handheld radio remotes and a flow sensor on each ballfield. Its main task is to determine the most efficient watering schedule based on ET, flow data (water already applied) and the available watering time as determined by the managers. Convenient handheld remotes allow managers in-the-field control to provide extra water for hot spots without affecting the schedule.

Fred Sanchez, parks maintenance manager, and Joe Kennedy, assistant baseball and parks manager, say they like the system because it meets their needs without too many bells and whistles, making it an affordable yet easy-to-use water management tool.

"Genesis gives us only the features we want and need," says Kennedy. "And, we’re impressed with its power. It would take two or three people to do the central’s job and much water would be wasted."

If Genesis is the brains of the team at Surprise, the rotors, spray heads and valves are the brawn. McBride specified Hunter’s top-of-the-line I-40-ON rotors for all the turf on the ballfields because of their uniform coverage, long range and high flow rate. The full-circle rotor’s second, opposing nozzle provides extra water right around the head to eliminate dry spots.

"With its high flow rate, the I-40-ON puts more water down in less time than other rotors, which helps tremendously with scheduling," says McBride. "Plus, these rotors have perfect uniform coverage, especially close to the head."

Kennedy sees this performance in the field. "There’s no donut pattern around the head like I’ve seen with other rotors," he says. 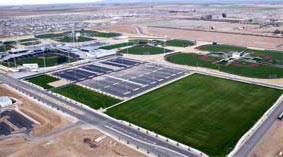 To handle the 100 PSI generated by the site’s powerful pump station, McBride specified heavy-duty Institutional Sprays for the smaller turf areas. With built-in pressure regulation, these spray heads operate at the optimum 30 PSI regardless of the inlet pressure for the least misting and best coverage.

Finally, rounding out the Hunter team are rugged ICV valves equipped with the Filter Sentry™, a feature that automatically cleans the valve’s filter and keeps it operating flawlessly. McBride specified the ICVs as the solution to the non-potable irrigation water supplied by the five-acre lake inside the park.

And the results? "The turf looks phenomenal — it’s exceeded everyone’s expectations. We’ve never seen a field perform like this before," says McBride.

All Part of the Hunter Team

While it's very unique to find such a large system supplied by one manufacturer, you won't hear any complaints from Kennedy, Sanchez or McBride.

"As maintenance managers, we only have to deal with one company and it's much easier to stock and store parts," says Kennedy. "Hunter worked with us from the beginning to make sure we got help with design, pricing, set up, technical support and troubleshooting."

As the designer, McBride adds, "On a project with a short deadline like this, you need instant help and Hunter has been able to provide that."