From Denver to Detroit, Chicago to Charlotte, Baltimore to the Bay Area, the United States has been undergoing a wave of stadium mania. Some are complete renovations, taking the existing shell of a facility and replacing virtually everything else – from seats to score-boards to the playing field. But the vast majority are brand-spanking new.

And this building craze has not been limited solely to giant metropolitan areas. Small Town America has gotten into the act as well. From Plant City, Florida to Maryvale, Arizona to Bakersfield, California, almost every tiny burg that plays host to spring training or minor league ball has built their own field of dreams. 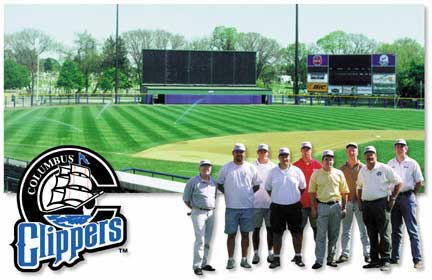 In the heartland of America, the trend has not gone unnoticed. In the past year, the city of Columbus, Ohio (pop. 600,000; metro area 1.3 million) joined in with a pair of pretty places to play, one each of the aforementioned types – brand new, for Major League Soccer's Columbus Crew, and renovated, with a totally new natural grass field for the Triple A Minor League Baseball Columbus Clippers.

Both of these projects were handled by Dublin, Ohio-based Missler's Irrigation and both featured installations that were comprised exclusively of Hunter rotors (supplied by Central Pump and Supply in Columbus).

For Missler's, it was a first-time opportunity to install at a professional sports site, after numerous high school, collegiate and municipal park sports facilities. For Hunter, it was just another day at the office, as the company's worldwide roster of installations at athletic venues reads like a "Who's Who" of Sports.

The magnificent 22,485-seat Crew Stadium is not simply a new stadium; it also holds the distinction as the nation's very first soccer-only sports facility. And it serves as the prototype for what soccer enthusiasts hope will eventually be found in every city where MLS has a franchise. The new stadium cost approximately $28.5 million and was built at no taxpayer expense, having been funded entirely by Crew owner Lamar Hunt.

Crew Stadium contains a total of 59 Hunter I-40 rotors that run off 14 zones on a Hunter ICC controller. "I have been a long time Hunter fan," said Mike Missler, owner of Missler's Irrigation. "Our company has done numerous sports field installations and we have found that nothing delivers like Hunter.

"In fact, a couple years back, we were called in to take over a job where another company's rotors had been recently installed. The product worked so poorly we took them out and replaced them with Hunter, even though the system had only been used a couple times. So, when we got the winning bid for these two stadiums in Columbus, it was a natural that we would install Hunter."

In addition to being a long-time fan of Hunter's Institutional Series rotors, Missler has also become an advocate of Hunter's new commercial grade ICC controller. "For sports field installations, the ICC's a winner. Thanks to expandable station modules, we know that we can use the same controller for any of our projects, whether we need to hook up a dozen stations or more than 40."

Out With the Old. In With the New.

The wave of new stadiums in the '90s has also seen a return of natural grass, erasing the legacy of the previous wave in the '60s and '70s where nearly all featured synthetic playing surfaces. At Cooper Stadium (opened in 1981), home to the Class AAA affiliate of the world champion New York Yankees, word came down from the parent club to get rid of the fake stuff and put in the real thing or run the risk of losing the team to another city.

Meeting this request would be no simple task, as not only the original artificial turf, but also everything under it, had to be completely removed in order to install grass. According to Missler, this made for an installation unlike any that he had ever performed before.

"There was so much work to be done that the removal of the old field wasn't even complete before our installation of the new field began," he said. "At one point, we had already finished putting in the new infield while they were still digging out the old outfield."

He noted that his staff had to wait until another crew first cleared the outfield of its old playing surface and then dug out the ground to a depth of more than a foot wherever new grass was to go. Once that was done, Missler's crew laid down tile. Above that were four inches of pea gravel, ten inches of amended soil and mason sand, and then, finally, the bluegrass mix of sod that would be the actual playing surface.

Prior to laying the sod, his staff made trenches in the pea gravel and laid pipe, installed a total of 4 PGP, 27 I-20 Ultra, 6 I-25 Plus and 43 I-40, then wired the entire system to an ICC controller, using 3 8-station modules to handle the 19 stations the system needed.

"When the 1999 season began, it was truly a sight to behold," said Missler. "What was once a lifeless expanse of synthetic material had been remarkably transformed into an exquisitely beautiful diamond – a real jewel. And we were proud to have a role in that."

And by the way, Columbus, so was Hunter.