Ohio Stadium is more than simply a place where people go to watch some games being played. In this part of the country, football is a veritable religion and Saturday is the day when the faithful make their pilgrimage to the holy mecca that is Columbus. To those in this pigskin congregation, the home of the OSU Buckeyes is their shrine.

And, through the years, this shrine has served its people well. Dedicated in 1922, Ohio Stadium was granted national landmark status fifty years later. The stately horseshoe-shaped structure has seen more than 30 million spectators pass through its turnstiles and in the process has become one of college football’s most recognizable icons.

Yet, this beauty was getting frayed around its edges and was in dire need of some shoring up. To accomplish this goal, in 1998, the university’s Athletics Department began a four-year, $150 million renovation to the stadium. When the renovation is complete, the new Ohio Stadium will feature wider aisles and seats, more concession stands and bathrooms, refurbished concourses, luxury suites, club seating, and a new state-of-the-art scoreboard. Oh, yes…and a new irrigation system, as well.

While the main goal of this project was to revitalize the actual stadium structure, a by-product of the job would be a complete replacement of the playing field. In order to accommodate the seating area expansion, the football field would be lowered by 14 feet, while the track that encircled the gridiron would be removed entirely. But, because of the topography upon which the facility was originally constructed eight decades earlier, the process involved more than just shoveling and hauling dirt.

“Because the Olentangy River is just to the west of the site, we were basically lowering the field to below the water table,” said John Peterkord, Senior Project Manager for the Ohio Stadium renovation. “What we ended up doing is putting in a slurry wall, along the perimeter of the field, all the way down to bedrock – varying in depth from 30 feet to 60 feet in some places. The purpose was to basically create a bathtub and keep water migrating down to the river from getting underneath the field. An underground pumping system was also installed to assist with irrigation.”

Irrigation that would end up being an entirely new system. Because when you dig a giant hole 14 feet below an existing field, it’s more than just turf and soil that ends up coming out of the ground.

The Right Prescription for Quality Turf

Various surfaces have been used to cover the Ohio Stadium floor. Between 1922 and 1970 it was natural grass. In 1971, AstroTurf was installed. In 1979, a second artificial carpet, this time Super Turf, was put down. Prior to the 1990 season, natural grass called Prescription Athletic Turf (PAT), the current surface, was installed.

PAT’s advanced engineering technology is considered the premier system in natural turf fields. Its design is based on the use of vacuum to forcibly extract water from the sand based field, keeping the surface mud-free and playable even under extreme weather conditions. It is the evolution of vacuum drainage systems like this that many in turf industry see as driving the trend in professional and collegiate sports back to natural grass fields.

PAT uses vacuum pumps connected to a network of buried tubes to suck water from the field. One interesting aspect of this technology is that the action can be “reversed” so that the field can be irrigated from the base up, allowing the turf to be watered even while it is under play. Heating systems are also available to keep the root zone warm and surfaces from freezing well into the winter.

A sophisticated system like PAT will perform at peak efficiency when it is paired with the optimum in irrigation components. So, it was no surprise when the company performing the installation, The Motz Group chose Hunter. When the renovation of the Stadium required the field to be lowered 14 feet, that meant that much of the PAT system would need to be reconfigured to a lower depth and the irrigation system would need to be installed once again, as if for the first time. This provided the ideal opportunity for The Motz Group to take advantage of the advances in irrigation technology since the existing products were installed in 1991. And they determined that the products on the market now that were best suited for the job would be those from Hunter.

The First Choice and the Only Choice 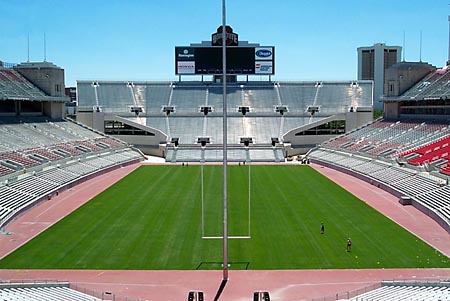 “Since we were essentially putting in what amounts to a whole new field, we could have chosen to install any brand of rotor,” said Mark Heinlein, project director for The Motz Group. “But, we saw no reason to turn to any other name than Hunter. We regularly install Hunter I-40 at our numerous other sports projects and we figured that they would be the ideal rotor for the conditions at Ohio State.

“First of all, the PAT profile allows only a 12" maximum. It sits above a geo-membrane and the head needs to fit in that profile. The Hunter I-40’s overall height of 7-7/8" – with a pop-up height of 3-1/2" – was simply ideal for these parameters.

“But, the prime reason that we changed to Hunter rotors was because of their reputation for high performance in a pure sand environment. We discussed the possibility of installing other rotors, but we were convinced that no other brand has consistently proven itself more reliable than Hunter. Thus, no other brand was ever seriously considered.”

In all, a total of 32 Hunter I-40 rotors were installed. The rotors were grouped in sets of four for a total of 8 field zones that would be overseen by an ICC controller. Rounding out the system were 2" HBV valves, installed in a manifold on the wall in the university’s maintenance building.

“We considered the competition for valves and a controller, as well,” said Heinlein, “but, once again, Hunter proved itself to be the superior choice. As for valves, there is nothing more rugged on the market than the solid brass HBV. And, for a controller, the superior flexibility and outstanding water management capabilities of the ICC made it easy for us to switch out the brand at this site and make the irrigation at Ohio Stadium a Complete Hunter System.” 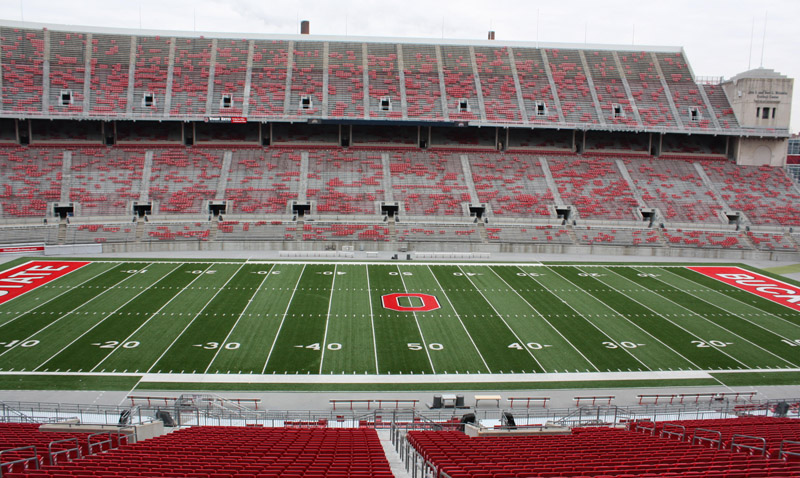