When the Anschutz Entertainment Group (AEG) built the new $120 million Home Depot Center sports complex in Carson, California, they asked only one question of their design team when the subject came to irrigation: "What company has their sprinklers installed at more professional sports facilities than anyone else?"

It was AEG's way of saying if everyone else decided these products are the best for them, then that's what we want here. "They wanted to spare no expense, cut no corners in choosing to go with the best out there," said Brian Mitchell, R.L.A., principal of Melendez Design Partners, the project's landscape architects.

Mitchell and his team carefully researched the subject and presented their findings to AEG. When the facts showed that Hunter was far and away the most preferred brand of sprinkler, the decision as to what rotors would be placed at the project was a no-brainer.

The nation's premier soccer-only facility played host to the finals of the Women's World Cup in October.
About 4,000 Hunter rotors help keep the playing field, as well as all the turf throughout the 125-acre multi-sport complex, lush and green. 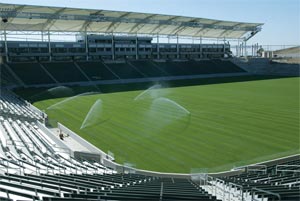 Soccer is the Centerpiece

The key element in the Home Depot Center complex is the 27,000-seat soccer stadium that plays home to the Los Angeles Galaxy of Major League Soccer. "A cathedral of the sport" is what league founder Alan Rothenberg calls it.

Yet the Home Depot Center is much more than that. It's a sprawling, 125-acre complex that also encompasses an 8,000-seat tennis stadium, a track and field facility, NCAA-caliber baseball and softball fields (for adjacent California State University, Dominguez Hills), training sites for the AVP pro beach volleyball tour and the NFL San Diego Chargers and, eventually, the only indoor cycling velodrome in the country. There are also five turf soccer practice fields.

In addition to all the sporting facilities, there are extensive slope areas throughout the site boasting ample amounts of turf, plus a natural vernal pool and adjoining retention basin for the reclaimed water that would be brought in and used to irrigate the complex. 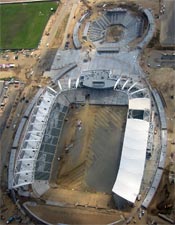 All these facilities and the surrounding acreage add up to quite a lot of turf. And every rotor that irrigates this greenery is a Hunter rotor.

"There are roughly 4,000 Hunter rotors here," said Irwin Roque, an independent irrigation designer that Melendez contracted to handle the irrigation for the Center. "We used a mix of large, mid-range and smaller rotors based upon the needs of each particular portion of the site."

"At the sports facilities, we installed I-40 and I-20 exclusively. Both rotors are a prime choice for sports fields of all types. On the common areas between the facilities and on the slopes, we used those two types of rotors, as well as a mix of PGP-ADJ (12" high-pop), PGP-ADJ (shrub) and PGM."

"We were dealing with radius ranges from about 18 to 65 feet. The full line-up of rotors and wide selection of nozzles made it possible to use a single brand – the one I've found consistently delivers the best performance. Hunter."

The new Home Depot Center quickly moved into the international spotlight. When the SARS epidemic hit China earlier this year, host status for the 2003 Women's World Cup was taken away from the Asian nation and the United States was awarded the 2003 Cup.

When the U.S. hosted the last Cup, in 1999, the venerable Rose Bowl hosted the Championship Game. Many expected Pasadena to get the call again. Or perhaps New York or Washington, D.C. But the new Home Depot Center surprised everyone and snagged the top honor.

We like to think it was because of the rotors.