With Heinz, the Steelers Play Catch Up to the Rest of NFL by Installing Real Grass Field

In the late 1990s, Pittsburgh committed a total of $803 million to a development package that centered on the construction of two separate sports facilities – a baseball-only ballpark (PNC Park) and a football-only stadium (Heinz Field). The package also funded expansion of the city's Convention Center and construction of the new Pittsburgh Development Center. In addition, the money retired the debt on Three Rivers Stadium and covered the demolition of that facility.

Terry Bradshaw and Franco Harris. Lynn Swann and John Stallworth. Jack Lambert and Mean Joe Greene. The Terrible Towel and the Steel Curtain. The names were synonymous with championship play, bringing home to the Steel City a total of four Super Bowl titles in the years that Three Rivers Stadium served as home to the National Football League Pittsburgh Steelers.

Yes, Three Rivers Stadium produced a lot of memories for the fans of Pittsburgh over the years...but the stadium itself was never one of them.

Three Rivers was a prime example of the non-descript, cookie-cutter class of American stadia that dominated the landscape in the 1960s and 1970s. Built to be a "multi-purpose" (i.e., handle more than one particular sport or event) facility, what the stadium lacked in style and design, it also lacked in character. No wonder that as the 20th Century drew to a close and the city of Pittsburgh looked to future, it saw a future without Three Rivers.

The Real Deal for the City of Steel 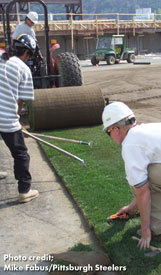 With a chance to create a new home for the city's beloved football heroes, Pittsburgh set out to do everything just right. Reflecting Pittsburgh's legacy, steel was made a primary building material in Heinz Field. But the stadium was not created to be a standalone piece of architecture; Heinz Field was created to work in harmony with its neighbors.

One of the key things that distinguishes a ballpark is its backdrop – what you see when you're sitting in the stands. And Heinz Field, like its nearby neighbor PNC Park (home of Major League Baseball's Pirates), showcases Pittsburgh's bridges, riverfront and Downtown skyline from almost every seat.

Also like PNC, Heinz Field has a natural grass surface. The grass is a blend of Kentucky bluegrass that was first seeded in August 1999, a full two years before the Steelers were to play their first home game in the new facility.

The 2.2 acres of bluegrass sit atop multiple layers of subsurface. Immediately below is a 10-inch layer of an 82% sand and 18% soil/peat mixture. Under that are 4 inches of pea gravel, which helps the water to flow through the upper lateral drainage pipes. Finally, there are all the pipes – more than 1 3/4 miles of pipes for drainage and irrigation.

Speaking of irrigation, there are more than four dozen rotors in use to water the field, including 48 I-40s and a handful of I-20s. The irrigation system is operated by a Hunter Genesis controller, giving Heinz Field the opportunity to take advantage of Hunter's premier central control package for commercial projects.

The Genesis controller has helped to make the Heinz Field turf lush and green, a real treat for Steeler fans that had to watch their heroes perform on an artificial surface for the past three decades. And, thanks to an automatic heating system that lies just beneath the grass surface and maintains the field at a constant 62 degrees, the players no longer have to contend with a frozen playing field either. 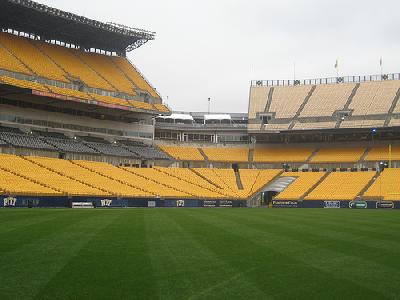 Prior to the new stadium's construction, the Steelers and the field construction experts at S.W. Franks gained valuable insight into creation of the Heinz Field playing surface through the design and construction of the team's training facility. "We learned from the practice complex which rootzone mix and other components were correct for the Pittsburgh area and our athletes," said Tim Keene, head groundskeeper for the Steelers. "The same principles and design were replicated at this new stadium field – including the use of unsurpassed Hunter rotors – and we are very pleased with the results so far."

The results that Keene has achieved have earned him the praise not only of Steel City football fans, but also the kudos of the team owner and president. Dan Rooney refers to Keene by the nickname that the grounds crew and local media have bestowed upon the turf supervisor: "The Sodfather." Rooney has said that Keene is so protective of his turf that he'd probably have someone killed just for standing on the grass anytime other than on game day.

It all adds up. Heinz Field + Hunter rotors = grass to die for. 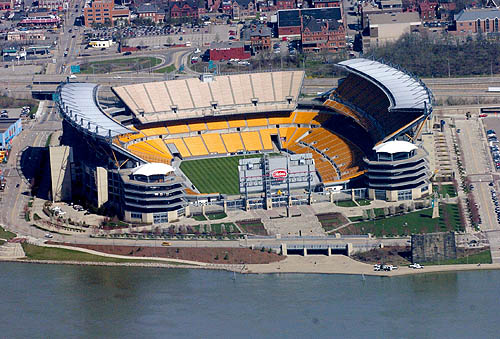