There are certain places across America that make a citizen’s heart beat stronger and blood run truer, while making that lump in their throat just a little bit bigger. It’s that feeling of pride and patriotism that only a few distinct locations in the country can bring forth. 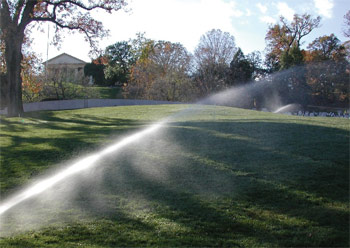 Arlington is the final resting place for thousands of American service personnel who bravely fought to defend our country and carry the banner for liberty and justice. Soldiers who served in battles that not only rage today, but also back in time to Vietnam, Korea, World War II, and even the Civil War.

It is also home to perhaps America’s single most famous burial site—the grave of President John F. Kennedy. Every year, more than 4 million Americans come to Arlington and, along with the changing of the guard at the Tomb of the Unknowns, the most frequently visited stop in the cemetery is JFK’s grave.

Since 1995, the green industry has held a Renewal & Remembrance project at Arlington, with industry volunteers donating time, labor and materials to restore and maintain green spaces at the cemetery. Typically, the work involves areas in and around the more than 260,000 gravesites scattered across Arlington’s more than 600 acres.

Last year, the green industry went a step further, as the project covered two phases—the usual summertime Renewal & Remembrance event, plus an autumn gathering to focus on restoration and improvements in the area surrounding the John F. Kennedy gravesite.

Working in conjunction with Project EverGreen (an organization dedicated to raising the awareness of the environmental, economic, and lifestyle benefits of landscapes), trees and shrubs were pruned, turf was fertilized, sodded, and mulched, plus other needed tasks were performed to help improve the green spaces at Arlington.

The biggest task? Installing a new irrigation system and new sod to prevent erosion from the Kennedy grave to the neighboring hillside and all the way up to the Robert E. Lee house at the high point of the cemetery grounds.

That’s where Hunter came in. 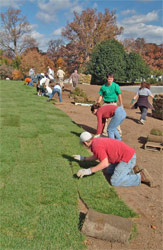 Project EverGreen was able to coordinate donations from a variety of companies in the green industry and Hunter gladly contributed all of the irrigation components necessary to create a new, state-of-the-art system.

“This hillside is considered to be the most visible piece of turf in the area and there’s significant history surrounding the Lee mansion at the top of the hill,” said Phil Fogarty, co-chair of Project EverGreen. “Around the time when President Kennedy was inaugurated he talked about the ‘city on the hill,’ and because the eternal flame marking his grave site is here, it’s our privilege to donate our time and expertise to beautifying this hill overlooking the city.”

And it is Hunter’s privilege to have been part of such a worthwhile and important project.