Little more than a sprinkler’s spray away from Hunter’s San Marcos headquarters is San Elijo Hills, the largest master-planned community in San Diego’s North County. Developers selected Hunter as the company of choice to keep its common landscapes in showcase condition with a full line of products.

Planned on 1,920 acres as a multi-neighborhood development—but designed to emulate the small-town atmosphere of some of the most revered communities in Southern California—San Elijo Hills is quickly taking shape. Its winding streets surround a central business district with a town square that will include dining, shopping, and other amenities.

Designed by world-renowned urban planner Peter Calthorpe, the award-winning San Elijo Hills community already has more than 6,000 residents, even though the community will not be fully completed until 2009. One of two new schools is already open, along with a large community park. An 18-mile network of hiking trails links the neighborhoods. Ultimately, the development will comprise about 3,500 homes.

Hunter was chosen to provide the irrigation systems for all of San Elijo’s common areas, including streetscapes, slope landscaping, and the 19-acre community park that boasts two ball fields, a soccer field, aquatic playground, large picnic area, and a 6,500 square-foot community center.

Hunter is proud to play an important role in this landmark community project. “Being part of the San Elijo project provides us with a very effective way to showcase our abilities to meet the needs and specific requirements of a large, commercial/residential master-planned community,” said Jeff Carowitz, Hunter’s vice president of marketing.

So far, three phases of the irrigation system are done, with two more to be completed during the next 18 months, according to Mark Laatsch, of ValleyCrest Landscape Development. 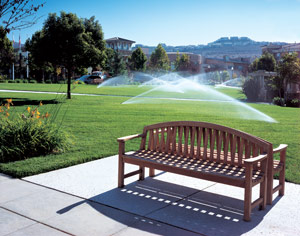 To give an idea of the sheer scope of the project, more than 22,700 sprinklers have been installed so far, including Hunter’s Pro-Spray®, PGP®,  I-20 Ultra, I-25 Plus, and I-60 rotors. More than 2,200 Hunter ICV and HQ Quick-Coupling valves are in place, along with 131,000 linear feet of main line and 439,000 linear feet—that’s more than 83 miles—of lateral line. Fifty Hunter controllers are already up and running ‘round the clock.

And that’s just for three of the five phases. “When everything is done, we will have well over 100 miles of pipe and several thousand more rotors, sprays, and valves in the ground,” says Laatsch, who has overseen the irrigation installation at San Elijo since the first phase of the community opened in 2000.

While Hunter’s proximity to San Elijo Hills was an added bonus, other factors were much more important, says Jeff O’Connor, director of operations for HomeFed Corporation, the community’s developer.

“We are extremely happy with the success we’ve had in using Hunter products, not only from a product standpoint but with Hunter’s customer service and technical assistance,” says O’Connor. “We were looking for quality as well as long-term durability, which is essential to the size and reputation of this community. We knew from the start that Hunter was the right choice, and in speaking with numerous landscape architects, they confirmed that we were right.”