When Toys “R” Us purchased a sprawling 200-plus acre site in Wayne, NJ to serve as their new World Headquarters, they inherited a 1960s irrigation system that was less technologically advanced than many of today’s children’s toys. The original system had only one controller location for the entire site, and it was as confusing as a Rubik’s Cube. The system was pieced together using many different manufacturers’ products. The wrong heads were installed with the wrong types of nozzles. The heads weren’t covering the required areas. Water waste was rampant. 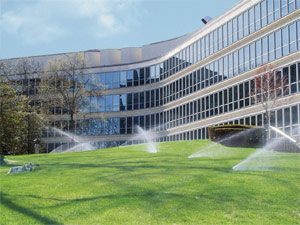 Renovations included refurbishing the well and expanding to five water sources, in order to accommodate the irrigation needs of two new buildings plus additional new landscaping, roads and parking lots.

Like the superhero action-figure dolls sold in Toys “R” Us stores, Hunter’s IMMS control system saved the day. The new-system design originally turned out to be a bit too ambitious for the Toys “R” Us budget, so the design was revised with the value-packed IMMS controller as the heart of the system.

“We saved about $17,000 by selecting IMMS,” said Richard Sands, Construction Manager for Toys “R” Us. “In addition to the tremendous cost savings, IMMS is providing us with central control convenience and simplified operation.”

IMMS allows maintenance staff to quickly monitor individual system components. For example, they can see how effectively a specific flower bed is being watered, and instantly make changes with an IMMS hand-held remote control unit – anywhere on the enormous site. That’s especially important, because the site has a whopping 124 zones on five IMMS controllers.

“The remote control feature maximizes staff productivity,” said Walter Mugavin, President of Aqua-Mist. “They were thrilled at how easy it was to program and use the IMMS controller. IMMS also makes it easy for my company to handle system management. From my laptop or my office, I can change and monitor all aspects of the system, which makes us more efficient and enables us to serve the client’s needs faster. This was the first time I installed an IMMS system. Based on the results, I’ll confidently install IMMS at many sites in the future.”

Varied Terrain is a Playground

Like the accessories that come with Barbie dolls, Hunter sprinklers perfectly complement the IMMS system at the Toys “R” Us site. Hunter heads and rotors offered the greatest flexibility to cover the large distances between heads on the property, while also providing the best water distribution pattern to cover the wide variety of irrigation applications.

Many areas on the site have odd shapes. Parking lot islands range from 5- to 10-foot widths. Some lawn areas are the size of a football field. Many lawn and garden areas are interspersed among walkways, driveways and roadways with 90- to 120-foot elevation changes and different slopes. Hunter delivered the nozzle versatility required to assure optimum absorption into the soil and to avoid flooding in variable-terrain areas.

The initial new-system design specified about 30,000 feet of drip around the massive executive building. By eliminating the drip system and instead using almost (500) I-20 rotors around that building, water control was simplified. That could save lots of “Geoffrey Dollars” for Toys “R” Us.

At Hunter, ‘Efficiency “R” Us’

Once the entire system was installed, it took two full days to complete the site walk-through. “On our tests, not a single I-20 failed out of the 1,200 we installed!” said Mugavin. “All components operated superbly. There wasn’t a single item on my punch list that needed to be changed. The Hunter system has brought the site’s irrigation efficiency to a whole new level. We’re utilizing about 245 gallons per minute, enabling Toys “R” Us to irrigate the entire site in just under five hours. That’s a significant accomplishment.”

Sands added, “The Hunter system saved us tens of thousands of dollars compared to other available systems. The integrated Hunter system provided by far the best value and capability to handle the diverse demands of our very large site, giving us the best return on our investment.”

Looking as Good as a Brand New Toy

The new Toys “R” Us World Headquarters site houses the administrative offices of Toys “R” Us, Kids “R” Us, Babies “R” Us, and Imaginarium brands. The corporation’s consolidation into one location will facilitate the sharing of most administrative and financial functions among the different divisions. With more than 1,600 stores in 30 countries, the future of Toys “R” Us looks bright. With the Hunter system controlling irrigation, Toys “R” Us Headquarters is also sure to look great for many years to come.