Bringing Together Past and Present

There has been a trend in baseball over the past decade to bring back the look and feel of the old ballparks that populated the major leagues until the advent of the multi-purpose stadiums of the late 20th century. The city of Pittsburgh once had one of the classic old-time parks in legendary Forbes Field, but that historic facility met the wrecking ball in the 1970s.

In its place came Three Rivers Stadium, the epitome of the circular, multi-purpose sports facilities whose appearance on the American landscape ran rampant throughout the 1960s and 1970s. Comprised mostly of concrete and plastic, Three Rivers was utilitarian in design and almost void of character.

With the construction of PNC Park, Pittsburgh has successfully borrowed the charm and style of the bygone era that was Forbes and married that with all the luxuries and comforts of the 21st Century stadium.

PNC Park has been inspired by the look of the city’s nearby bridges and civic buildings, bringing together an attractive mix of sweeping stone arches and vertical steel towers. In the process, PNC Park has become the Major’s only new ballpark that’s bucking the “brick” trend. The resulting design is one that feels equally at home surrounded by a host of the North Shore’s 19th Century buildings as it does with the many new buildings that are scheduled to rise in the adjacent development zone.

The Field is a Hit

While PNC Park is receiving raves for its design and construction, the playing surface has been met with overwhelming approval as well. No more artificial surface like the one at Three Rivers. This field is state of the art.

Bluegrass was chosen as the turf for PNC. Considered ideal for sports turf, it is resilient to moderate damage, resists disease, thrives in sun or shade, has a lustrous color from early spring to the fall and is strong enough to survive a Pittsburgh winter. Its roots grow best in the spring and fall.

Looking at the playing surface from the bottom up, a base of about 18 inches of pea gravel sits atop the drainage and irrigation system. Then comes an 8- to 12-inch root zone of sand and mineral soil. In preparing the field for the sod to be laid, grading was so precise earth movers were actually guided by laser beams.

Hunter Starts…and Comes Off the Bench 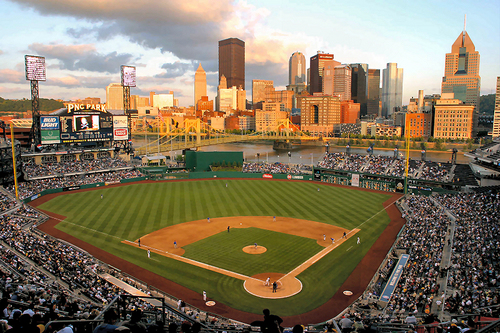 The irrigation system is anchored by a 14-station ICC controller. The watering is handled by an army of 79 rotors, featuring 56 I-40s on the playing field, 11 I-20s in foul territory and 12 more I-20s in the two bullpens. Each station includes an ICV valve with Accu-Set™ pressure regulator and there are also 8 HQ quick couplers located around the field to provide easy access for additional hand watering of areas where Yoder sees the need.

“When the ballpark opened, we had all Hunter products except for the valves,” said Yoder. “I’ve always been a fan of Hunter rotors and since the introduction of the ICC, I’ve been sold on that as my controller of choice.

“After a season with valves from another company and all of the problems we had, I couldn’t wait to take those valves out and replace them with ICV. Now, we have a complete Hunter system in place and absolutely no problems. We should have gone with all Hunter from the start.”

Oh well, we all make choices, Luke. Didn’t the Pirates once have some guy in left field named Barry Bonds?