The first decade of our new millennium is seeing the Big Apple undertake what might be referred to as the Big Project. It has been a century and a half since the city of New York undertook an urban landscape project on such a scale.

When Hudson River Park is completed, it will extend for about 5 miles, paralleling the city’s West Side Highway, from Battery Park north to 59th Street. Thirteen new recreational piers will be built. And the entire project cost is expected to be approximately $400 million.

First part of a 28-Mile Circle

Eventually, the Park will be part of something even grander. Plans call for it to be the first portion of a 28-mile linear park that will encircle the entire island of Manhattan. In turn, that park will be part of an even larger park network, serving as an extension to the southern end of the Hudson Valley Greenway Trail System, which extends up river all the way to Waterford, north of Albany.

The first segment of the Hudson River Park located at the edge of Greenwich Village, is now complete. Esplanades have been built. Three of the new piers are open. Bike paths meander through the landscape. But, this is, after all, a park…and that means greenery.

There is plenty of that here, offering an oasis between the pavement and high rises of the city, and the waterfront that looks out upon a vibrant, functioning riverway. Bushes, hedges and flowers abound. Trees are scattered throughout. And there are numerous expanses of turf, both along the linear portion of the park that parallels the Hudson and on the trio of piers that juts out into the river.

Broad Turf Expanses a Natural for I-20

One of the more prominent features of the project, the piers have been designed to serve as primary gathering spots for park users. The three newly constructed piers combine groves of trees and grassy lawns with such features as playgrounds, shade structures, and, on one pier, a synthetic turf field.

Each pier featured a concrete foundation atop newly installed pilings. That foundation was then filled with sand and soil, much as a new football field would be created in a stadium renovation.

“The broad stretches of turf were a natural for Hunter I-20 Ultra,” said Michael J. Astram of Northern Designs LLC, of Milford, Connecticut. “Hunter rotors can’t be beat for their quality, performance, and reliability. And, with its heavy-duty construction, the I-20 is ideally suited to a high traffic area such as this.”

Astram served as the irrigation consultant to the project’s landscape architect, Abel Bainnson Butz of New York City. In his role, Astram was responsible for selecting the appropriate irrigation products to be installed at the many and varied landscapes that comprise the park. So it’s no surprise that wherever you look for a rotor, you’ll see the Hunter brand name. To date, there are nearly 500 I-20 rotors in place.

“What can I say, I’m a big fan of Hunter,” said Astram. “The rotors are easy to install, easy to use, and easy to service. And, they deliver superior coverage while possessing the durability to handle a busy urban environment.”

Astram noted that another factor in choosing the I-20 was the sprinkler's ability to be custom-fitted to all landscape spacings from 17 to 47 feet, thanks to the sprinkler’s 22 different nozzle choices. The numerous choices made it possible for a single sprinkler model to accommodate a wide range of needs…and eliminate the need to mix both sprays and rotors.

A full rack of 8 standard and 4 low angle nozzles are included with every I-20, plus there is an option of 10 specialty nozzles. Six short distance nozzles provide the coverage of a spray with the benefits of a commercial-grade rotor, and four High Flow Nozzles are for systems that need to deliver water at a quicker rate. 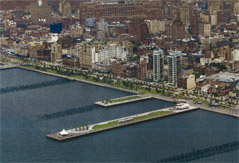 When most people think of New York, the first thing that comes to mind is the skyline. Towering structures of glass and steel, surrounded by am expanse of asphalt and concrete. When you approach the city at ground level, that’s literally all that you see. But, the Hudson River Park is the city’s attempt to soften that image, by providing a ribbon of greenery that will encircle Manhattan and serve as buffer between the sea of water and the sea of buildings.

New Yorkers are adding a little bit of color to a rather gray canvas and Hunter is proud to have been chosen to keep things green.