As if building a new baseball stadium in the middle of the desert isn’t enough of a challenge, try doing this with a giant retractable roof and a massive air conditioning system.

In today's world of new sports stadiums springing up all around the country, Bank One Ballpark in Phoenix is unique. Its playing field is exposed to the sun (and what a hot, strong sun it is) and the natural air some of the time, but is actually indoors and air conditioned most of the time. Unlike other new retractable roof facilities in such places as Seattle, Houston and Milwaukee, the ballpark affectionately known as "the BOB" has to deal with the extreme climatic conditions of Arizona's Valley of the Sun – heat and low humidity.

It’s a challenge that has seen the grounds crew struggle with various types of turf to find which one will work best under such harsh conditions. But, through it all, the guys have remained true to one brand of irrigation products: Hunter.

"Finding the turf that would work best in this unique environment was difficult, but deciding what brand of rotors to install was a no-brainer," according to Head Groundskeeper Grant Trenbeath, a longtime fan of Hunter. "It was I-20 Ultra and I-40 rotors all around. Not only do these sprinklers deliver uniform coverage, they are also user-friendly and versatile in so many ways."

Ah, but the turf. That took some fine tuning.

Because real grass has never been grown successfully under a domed stadium, the Diamondbacks spent $160,000 to have a new variety developed just for the BOB's unique environment. The University of California at Riverside developed a special blend of zoysia (called DeAnza) which is a tough, dark green turf that exhibits characteristics of both shade-loving St. Augustine and heat-loving Bermuda.

The turf was developed to work in tandem with the ballpark’s dome. In turn, architects carefully researched exactly to what degree the roof would need to be open on any given day in order to provide the turf with maximum light while giving the seating area maximum protection from the direct rays of the sun. In summer, when temperatures in Phoenix can reach well into the triple digits, the roof would be closed at least four hours before game time to allow air conditioning to cool down the park. At night, the dome would be opened to allow the daytime heat to dispel. With all the opening and closing of the roof, some areas of the field were bound to receive too little natural sunlight. Large mobile growth lights were on hand to provide a substitute for the sun.

Eleven hundred rolls of DeAnza sod, each 35 to 50 feet long and 42 inches wide, were grown under artificially shaded conditions similar to the environment the turf would encounter in the BOB’s belly. It required 15 tractor-trailers to deliver the load from Palm Desert, California to Phoenix (a six-hour journey). After the long trek and days of installation, the sod needed to be watered heavily and then covered with a perforated plastic material that kept the new grass warm (the install was done in December) and encourage root growth.

If at First You Don’t Succeed… 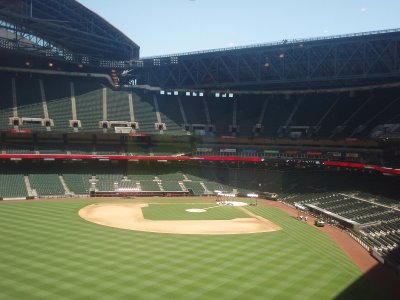 But even with all the careful planning, the Diamondbacks inaugural season was a rough one for the turf. As a longtime user of Hunter rotors, Trenbeath was confident that the sprinklers were delivering the optimum level of irrigation performance. Yet, some portions of the grass were not doing well. "We were having entirely too much trouble dealing with the combination of strong sun plus high heat when the dome was opened and no sun when the dome was closed," he said. "It was beyond anything the irrigation system could do. We had a bigger problem on our hands."

So, after the BOB's Year One, the Diamondbacks opted for a blend of bluegrass and rye grass, the same traditional turf that's used in ballparks across America.

"I don't think people understand the magnitude of what took place here the first year," Trenbeath said. "This turf was the very first of its kind and we were in a constant balancing act of providing enough sun for the grass, while trying to deal with wear and tear, and keeping the roof closed early enough to make it comfortable for the fans by game time."

With all the heat issues, believe it or not, there was also the problem of getting the grass to grow in the early part of the baseball season, when temperatures are cooler – the special DeAnza strain doesn’t do well until the minimum temperature reaches at least 70 degrees.

After rejecting a proposal to install underground heat beneath the field during the off-season, team officials decided to overseed 107,000 square feet of the DeAnza with a blend of bluegrass, which does well in cool weather, and rye.

And so it would be another balancing act. The grounds crew closed the roof and used the air conditioning to keep the heat down while making sure it was open often enough to provide sufficient light. Plus, Trenbeath saw to it that there would be a regular regimen of additional light watering from the Hunter rotors in order to keep the surface temperatures lower.

This time, it was a success. The field was a much deeper green than the original field, and there were no unsightly patches of replacement sod. Grass was growing – quite nicely, thank you – year round in these oven-like surroundings where only cactus and sagebrush could expect to survive.

All because of a winning double play combination of the right turf for the environment and the right rotors. 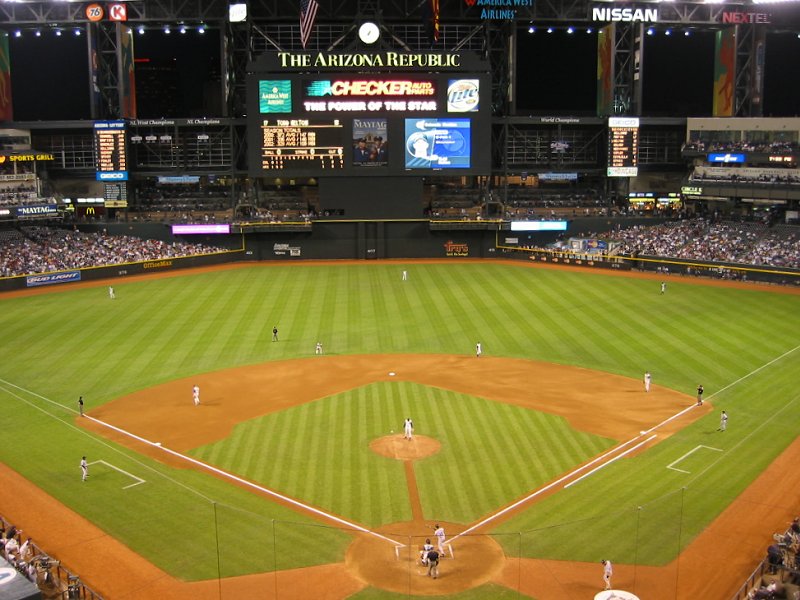