The presidency of Franklin Delano Roosevelt left a strong impression on American society. As the United States emerged from the depths of the Great Depression, the country established itself as a world superpower in World War II. But on the homefront, much was being done as well.

Perhaps one of the greatest legacies of the FDR administration was the Works Progress Administration (WPA). This federal agency was in existence from 1935-1943 and was charged with instituting and administering public works in order to relieve national unemployment. Often cited as the most visible of all the WPA projects was the Tennessee Valley Authority, the taming of the Tennessee River with a series of dams and reservoirs to provide water and electricity for vast areas of the Southeast. But all across America there were smaller projects performed by the WPA that left their mark on virtually all corners of the country.

One of these projects was the construction of a new City Hall building for the city of Houston. And, over 60 years later, this building remains one of the nation's finest examples of WPA architecture. 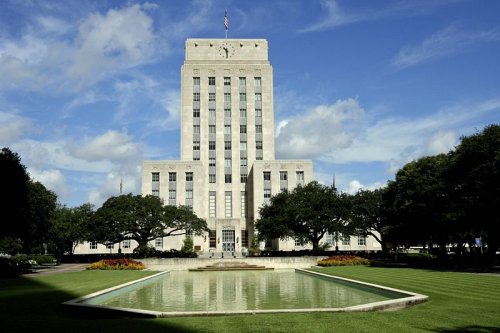 While the City Hall building itself is one of the more notable icons of this Texas city, the grounds that surround the structure play no less a role in the day to day life of Houstonians. After all, most residents never have set foot inside of City Hall. Yet a large percentage of these very same people have gathered on the surrounding acreage for the almost daily procession of festivals, concerts, protests and rallies – a line up of events where it seems one of which takes place on a daily basis.

This large open space must continually deal with a high volume of foot traffic that uses the turf as a transportation corridor as often as – or perhaps even more than – the sidewalks. Couple this with the oppressive Houston summer heat and if the goal is to keep the landscape looking its best, well, you have an irrigation nightmare.

No wonder then, that when a new irrigation system was planned for the park, the municipal grounds maintenance crew turned to Hunter rotors, particularly the PGP®, to ensure their beloved corner of earth could stay lush and green.

Hunter’s original product and year after the year the top-selling rotor in the entire irrigation industry, the PGP is the standard by which all other sprinklers are measured. Like all Hunter sprinklers, the PGP has been built to withstand a lot and deliver unparalleled performance for a long, long time. With features like a large dirty water screen and the superior ability to deliver even water distribution from precision engineered nozzles, the PGP is unequaled for reliability, durability and versatility, making the sprinkler an ideal choice for a high profile site like the grounds of the Houston City Hall.

"We have many outdoor events and activities in the park in front of City Hall," said Tom Grieve, Assistant Director of Parks for the City of Houston. "The Hunter PGP has proven itself against all others as the best for standing up to the harsh foot and vehicle traffic that this site gets. Plus, I especially like the high-pop version (the 12-inch PGH model) that so efficiently waters the big azalea beds alongside City Hall."

Grieve noted that some of the reasons why he is such an advocate of the PGP for this site include the sprinkler's heavy duty spring, through-the-top adjustment and superior coverage. The PGP’s spring is the strongest in its class, assuring reliable retraction every time, protecting them from mowers and eliminating potential injury hazards. With handy symbols right on the sprinkler, the PGP is the industry’s easiest to understand and can be adjusted wet or dry. And, only the PGP provides excellent coverage both close to the sprinkler as well as throughout its full distance of throw, ensuring that landscapes like the City Hall lawn will have no wet spots or dry spots.

From 1841 to 1939, Houston municipal government was headquartered at Old Market Square, on a site donated to the city by Houston’s founders – the Allen brothers. The City Hall on Market Square was destroyed by fire in the 1870s and again in 1901; each time it was rebuilt. In those days, City Hall was part of the lively commercial atmosphere of the Square. But, by the 1920s, the city fathers had decided the site was no longer appropriate for their day to day needs.

In 1929, a report by the City Planning Commission urged the establishment of a Civic Center – a downtown area of architecturally-coordinated buildings and parks. The commission suggested establishing the Civic Center around Herman Square. When the Depression hit, plans for the new center were temporarily sidetracked. However, when FDR instituted the WPA program, the city applied for a WPA grant to help finance the construction of a new City Hall.

Construction began in March 1938 and continued for a period of 20 months. The completed structure, while offering an appealingly simple design, featured a host of magnificent construction details that have helped to make this building the architectural classic it remains today. The doors to the building are of a specially cast aluminum. In the grillwork above the main entrances are medallions of the "great lawgivers" from ancient times to the founding of America – Julius Caesar, Moses, Charlemagne, King John, Thomas Jefferson. The lobby is walled with lightly veined marble. The gateways to the Tax Department are inlaid with bronze, nickel and silver. All elevator lobbies are treated with marble base, walls and wainscoting. In addition, the building was the first public site in Houston to be fully air conditioned.

Today, Houston City Hall is dwarfed in size by neighboring skyscrapers and is among the smaller such facilities for an American city of its size. So, how does the government of one of America's largest cities function out of a building so small? The answer is, it doesn't. Sad to say, but this magnificent legacy of the WPA becomes less vital every day as essential city services are moved into annexes and other buildings. City Hall is becoming more and more a place of ceremony for the mayor and city council. But, to the citizenry, chances are this beautiful public space will always be a place to gather and will forever be the city of Houston's "front lawn."