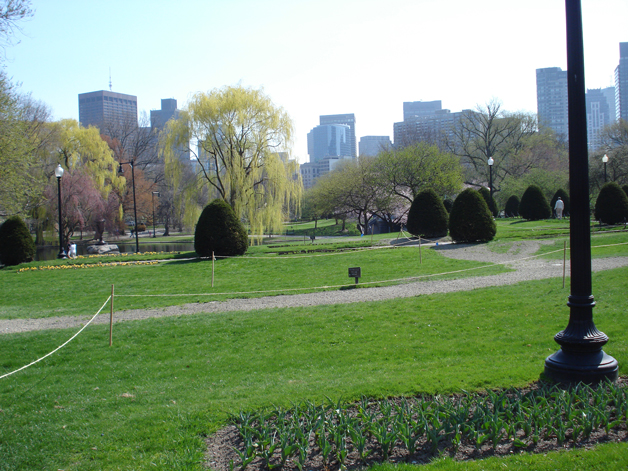 As irrigation projects go, the Boston Public Gardens job is in a league of its own. It was, by all accounts, a challenge of monumental proportions. Surrounded by four city streets in the heart of Boston, the park is bounded by Beacon, Boyston, Charles and Arlington Streets. The configuration of the park is such that on one side is Boston Commons, and on the other is the “Emerald Necklace,” a series of open green spaces through the city. Surrounding a lagoon in the center of the public property, 19 of the park’s 24 acres required irrigation.

Jeff Bowman, project engineer and designer, Irrigation Consulting, Inc., directed the elaborate design. “The vision was to help improve the conditions including the quality and design of the turf, and to reduce the labor and maintenance attributed to irrigation,” he said. “We also sought to improve the coverage including both uniformity and areas that weren’t being reached.”

“We had four quadrants turned on during business hours, of which we had control of only one at a time,” he explains. “Everything is now completely computerized. There were four ICC controllers, one per park quadrant, with a multi-wire system.”

The previous system, astounding yet true, was 100 percent manual. Of the whole property, five acres of irrigation had to be watered manually. “You can imagine the large amount of gallons per minute and over-irrigation to compensate for the runoff,” says Bowman, who designed the new state-of-the-art system. “It’s unbelievable to think it was irrigated this way. We’re saving water and helping the City.”

Sammy Sameski, site superintendent with Boston Parks and Recreation, says it all. “We went from the Stone Ages to 2008.”

Jim McGovern, sales manager, Hunter Industries in the Boston area, says the project was a long time in the making. “It was an extended sales cycle from start to finish, over about five to six years.”

Nicholas Khoury, irrigation project manager with Valley Crest Landscape Development for some fifteen years, was in charge of the installation and deeply involved through these phases of the project. Valley Crest, which has its home office in Calabasas, CA, handles some $33 million in revenue in the Boston area alone. 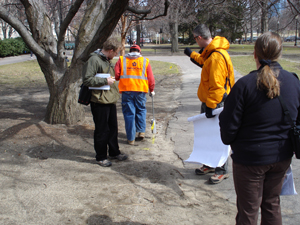 “This was a very impressive project on several levels,” explains Khoury. “It was an $800,000 job including the irrigation. There were 12,000 feet of main lines from eight inches and smaller, with 40,000 feet of pipe. All of it was supplied by Hunter.” The Boston area branch of Valley Crest Landscape Development does landscape, hardscape and irrigation, handling primarily commercial jobs.

“It was difficult because the site is used daily by many people,” explains Khoury, “from parents taking children to ride on the swan boats and see ducks during the summer to joggers, tourists, and business people having lunch.”

Notable is that extensive use of Hunter’s MP Rotator contributed significantly to the success of the project. “The MP Rotator has a gentler, lower precipitation rate than conventional spray heads,” explains Bowman. “This was very important because the park gets so much use, the soils are compacted, resulting in substantially more runoff.” For that reason, conventional spray heads alone don’t work, and the MP Rotator brings increased efficiency.

Apparently, the irrigation enabled an amazing leap in both quality and results. “With five acres of microclimates, including both sun and shade, you have to adapt to the specific area,” said Bowman. “You can already see the park looks better than ever.” 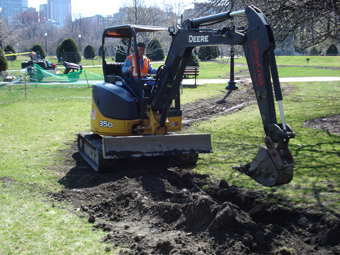 One point is clear – this was no ordinary irrigation job. To be sure, the park had very specific criteria. Khoury elaborates. “We were trying to install an eight inch pipe and equipment in living gardens where every tree is a specimen dedicated by The Friends of the Garden. When we laid out the site with spray heads, we did it zone by zone to be the least invasive to the tree root systems.” So one of the many challenges was how to work the lateral and main lines around the tree roots.

Bowman echoes his sentiments. “The public garden is a landmark in the City of Boston. Every tree has a history and not one could be damaged.” A couple of arborists were vital to the project to help protect the trees.

There were other considerations still. “This is an actively living park that stayed open throughout construction,” explains Khoury. “The job had a completely different set of parameters than usual. If there were too many workers on-site, we’d get a call.” The installation crew not only had to complete the job, but also be invisible. No small task. Needless to say, when the team took on the gauntlet of this venerable park, it had to overcome more than the typical set of obstacles to irrigate it properly.

“Even for a big construction company like ours, this was a huge job,” said Khoury. “We are doing irrigation work at other locations such as Harvard and M.I.T., but nothing compared with the magnitude of this project. We all learned many lessons.” Khoury clarified the timeline on the installation, which began on March 10, 2008 and was completed in early August. Valley Crest Landscape Development, with close to $1 billion annual revenues and 10,000 employees nationwide, is an irrigation construction company that does primarily commercial projects.

As Bowman outlined earlier, MP Rotators were specified to address the special needs of the park. There also are not a lot of right angles in the park, so the system had to accommodate that. The project is now broken into some 150 zones to target the needs of different areas. An orchestration of labor and strategy, Boston Public Gardens demanded a sophisticated system of irrigation. 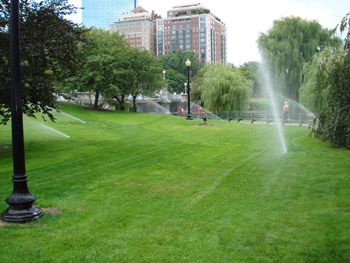 “We used Hunter Pro-Series Sprays with Pro-Adjustable Arc Nozzles… we installed some 960 Hunter spray heads, Institutional spray heads, and 710 rotors, including Hunter’s I-20 ADS and I-20 36S as well as I-25 ADS and I-25 36S,” explains Khoury. “Of all the rotors used, more than three-quarters were MP Rotators. On the surrounds, we installed MP 1000 Series Rotators. In addition, we used MPSS530 side strips.” Khoury is a loyal fan. “Most of our jobs are Hunter; some $4 million of in-house design alone is almost entirely with Hunter products.”

Bowman noted that Weston and Sampson, a civil engineering firm, assisted with electrical upgrades for landscape lighting, modest walkways, and other aspects of the job including some drainage issues.

“The City of Boston is a friend to Hunter Industries,” says McGovern, who points out that the scope of hydraulics was extensive. He is quick to acknowledge the hard work of the people who contributed to the project, adding that the main companies involved in the Boston Public Gardens job do a lot of good work for Hunter.

“The City chose Irrigation Consulting and Valley Crest,” said McGovern, “both of whom were instrumental in the success of this project. It is really a beautiful park!”

Now that the irrigation is both reliable and state-of-the-art, you can bet it’s going to stay that way.