Hunter has had a long and storied relationship with the San Diego Padres. The company had its irrigation products installed at the ball club’s previous home, Qualcomm Stadium. 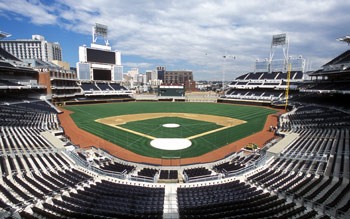 In addition, Hunter has also been a partner with the Padres in the Little Padres Parks program–the building of dozens of neighborhood playing fields for youths from all walks of life in San Diego and Tijuana. Hunter has contributed thousands of dollars of irrigation equipment over the years to this civic cause.

It was only natural Hunter would be the choice at the new Petco Park, as well.

The Petco Park turfmeister didn’t need to be sold on installing Hunter products. Luke Yoder, Padres director of field and landscape maintenance, came to the organization after three years as head groundskeeper at Pittsburgh’s PNC Park, which opened in 2001. When the Pirates hired him, he was the youngest head groundskeeper in Major League Baseball.

“Hunter did an outstanding job for us at PNC; I know it will at Petco, too,” said Yoder. “With features like I-40’s ProTech™ safety system and I-20’s FloStop® Control, Hunter rotors are the best thing going for sports fields. And, there’s no controller that combines sophisticated program features with ease of use like the modular ICC does.” 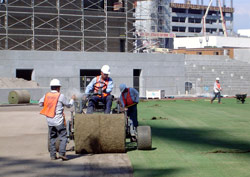 The construction of a new 46,000-seat ballpark for downtown San Diego has been a bumpy ride, to say the least. In 1998, city voters approved a $411 million public/private financed project (including land acquisition and infrastructure). The plan was not to simply build a new home for the Padres, but also redevelop a run-down, 26-block downtown section surrounding the ballpark.

But, as work on the new park began in mid-2000, pending litigation brought all to a halt just four months later. The site lay empty and still for 16 months until the last of over a dozen lawsuits was resolved in favor of the City of San Diego.

After construction resumed, another 16 months passed before it was time to concentrate on the playing field instead of the concrete and girders.

Early last July, drainage and irrigation systems were installed. The irrigation was then covered over by orange pea gravel and a 12-inch "root zone" of sand and soil. The base paths and warning tracks were developed and the outfield was "formed up" and contoured to final grade. Then, came the sod.

The turf was installed early–more than six months prior to Opening Day–to provide time to take root before play began in April. “We wanted it fully mature and established to hold up to an 81-game home schedule," said Yoder.

The Padres bought 100,000 sq. ft. of Bulls-Eye Bermuda turf sod that was raised in the desert, and a caravan of 11 tractor-trailers made the 3-hour haul to the ballpark. After the grass took hold through the fall, Yoder overseeded the field with rye (a cool season grass) for the winter.

More than Just Turf to Maintain 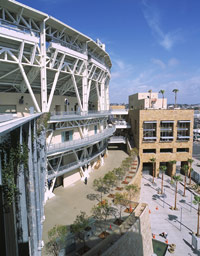 In addition to the usual turf mowing and infield grooming that makes up a typical grounds crew’s daily work, Yoder's staff will also be responsible for handling what amounts to an ample-sized nursery.

Setting Petco Park apart from other major league stadiums is the widespread use of greenery and color, including distinctive lavender-flowered jacaranda trees, bougainvillea that will eventually grow to show off bursts of bright colors, and forests of palms at both the main and secondary entrances to the park. Currently under contract to the firms that installed the plantings, it will eventually be maintained by Yoder’s staff.

Plus, there’s the 2.7-acre “Park at the Park.” An additional site for fans to congregate, located beyond the centerfield wall, this park area is something unique amongst major league ballparks.

“There are a lot of different things to oversee,” Yoder pointed out. “For now, we’re using a Hunter ICC with 19 stations and an IMMS site interface. That gives us the ability to expand the system as the needs dictate.”

Irrigation designer Lance Sweeney (Sweeney and Associates of Temecula, California) specified all of the irrigation products to be installed at Petco Park. Sweeney chose a mix of 89 Hunter rotors: 62 I-40 rotors on the playing field, 19 I-20 rotors to handle foul territory and 8 high speed I-42 rotors on the infield skin.

"The site and its schedule are pretty demanding," Yoder said. "It won't be uncommon for myself and my assistants to put in 100 hours a week."

At least he’s got the performance and reliability of Hunter there to help. Otherwise, it might have been 150.