Pitching in for a Common Cause: Building of Coors Field Taps into Teamwork

In Denver, the process of building a baseball stadium could be considered somewhat of a metaphor for the sport itself. The creation of Coors Field was not the result of a single power hitter. Turning the Colorado Rockies' new home into a reality 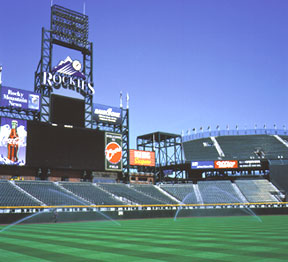 was akin to a pitching staff working together – each hurler playing his respective role – to bring the team a victory.

Designed by HOK Sport, the same architectural firm credited for bringing a classic (i.e., old-fashioned) look to other new ballparks – including Jacobs Field in Cleveland and Camden Yards in Baltimore – Coors Field cost $215.5 million to build, with more than $161 million coming from taxpayers. Once construction of the facility began, nearly two years went into the planning and then preparing the playing surface to be ready for that very first Opening Day.

The creation of the playing surface for the new stadium was a joint effort between the Rockies owners; landscape architects and field designers at Randall & Blake, Inc. (with the aptly-named acronym, RBI); the Rockies ground crew; and a wide range of independent consultants who gave the ground crew assistance and advice. Looking for our metaphorical starting pitcher? How about those guys in earth movers and cranes, who first gave shape to the facility.

To be ready for Opening Day, the plan was to start preparing the playing surface on the preceding July 1. However, cranes and other heavy equipment were still in place and the RBI crew could not begin work until more than six weeks later. In addition, the Rockies did not make their final decision to install a field heating system until mid-May, causing additional time constraints. Setbacks like these would, in turn, cause other delays – most notably, sod laying would take place near Halloween, a full month later than desired, and very late for such work.

By August, the ball was firmly in the hands of RBI. Their design/build division handled the selection of sod and soil types and had overseen growth of the sod (a 15-month process prior to transplant) at Graff Turf Farms in nearby Fort Morgan. The turf was a blend of four varieties of bluegrass and two types of rye, chosen because of disease resistance and bright color, especially in the early months of the baseball season.

In baseball, a pitcher works closely with his catcher, his pitching coach and other members of his staff to help him bring his best stuff to the mound. In a working relationship like this, RBI worked closely with Mark Razum, the Rockies' groundskeeper-to-be, in choosing the fieldâs soil, a rootzone mix that is 90% sand and 10% peat moss.

To keep all this looking good, Hunter I-25 and I-40 rotors, HBV valves and brass quick couplers were installed. RBI has a preference for Hunter rotors because of their stainless steel shafts that allow for positive retraction and no wiper seal damage. According to their design manager, this would be "especially important because of our sand based field". Hunter's adjustable arc feature also factored heavily into the decision of what brand to use. "On a field like this, when an irrigation system is in operation, we want the water to go only where it is supposed to," the design manager noted. "With Hunter rotors, we can be sure they will do just that."

Denver is famous for extreme weather conditions, including wild swings of 50 degrees or more within a single day, and snowfalls in June or September. To keep the playing surface at its finest through this, 45 miles of underground electric heating cables were installed. The system is broken down into three zones, each with its own thermostat, enabling the field to maintain an optimum temperature during freezes and help it "green up" for early season games. In addition, RBI's patented "GraviTURF" system was installed to passively drain precipitation through a level of pea gravel below the rootzone and on into more than two miles of perforated sub-drainage piping. Guaranteed to remove up to five inches of rain per hour, this gravity-based system is so efficient the field will be ready for play just minutes after a heavy downpour.

Midway through construction of Coors Field, Mark Razum was selected to be head groundskeeper for the new facility. Only one problem – Razum was unable to assume his duties until October (a mere six months before Opening Day), following conclusion of his contract with the Oakland Athletics. Until assuming his post, however, Razum was able to serve as a consultant and worked closely with RBI in decision making matters. A prime example was the selection of the infield. Since this is Razum's specialty, RBI used Razum's recommendation for combining two types of soil with the intention of creating a 70% clay / 30% sand mix with the soil base.

Razum arrived at Coors Field virtually the same time RBI was installing the sod into the stadium. Thus, one of Razum's first responsibilities would be his most difficult – making sure the turf would take hold and survive through the harsh Colorado winter. This would be no easy job since everything was already running behind schedule. His other most difficult task is ongoing: dealing with the weather and determining how it affects the field. But his crew, including some with local experience at nearby Mile High Stadium and others who have worked with Razum at his previous jobs, will find a way – even if it means pulling the rain tarp on and off five times during a game as has happened on more than one occasion (at least those times result in a well-deserved day off for the Hunter rotors).

Coors Field opened to rave reviews and has been delighting fans, both on the field and in the stands, ever since. The stadium has turned into a hitter's dream – a veritable "launching pad" for home runs – and daily scores like 17-12 and 19-11 have become the norm. But it is not only this exciting brand of baseball that has made Coors Field fan-friendly, it is also a result of the wonderful environment that the ballpark offers. New stadiums now in place from Seattle to Houston to Detroit – and even more under construction or still in the planning stages from Pittsburgh to Milwaukee to San Diego – all attempt to take their cue from Coors Field. Coors Field. Built with an eye to the future, but with its heart in the past.