Saving 2.5 million gallons of water has been enough incentive for Grounds Manager Chris Ralston to install the same central control irrigation system at two different baseball stadiums in California. He first tested a Hunter system in 2008 at his previous location in Lake Elsinore, Calif. "We spent $15,000 and it saved $55,000," says Ralston, now with the Sacramento Rivercats, which is the AAA team for the Oakland Athletics. "We brought it up here in February when I arrived. I'm hoping to bring the same savings here to Sacramento.". 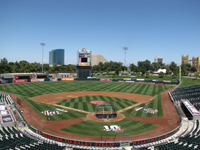 This amount of water savings is important, because even though Ralston says they have no water restrictions yet in his area, conservation is still on the forefront of everyone's mind. Restrictions could be in the works depending on annual snowmelts, and how water is managed season by season. "We do what we can and we've made changes by installing a new irrigation system," he says

Ralston needs a good system. He has 82 irrigation zones at the stadium and his grounds maintenance program includes everything from caring for turf, to rose beds, shrubberies and trees. His four-employee operation (plus 20 seasonal workers) has to keep everything green for the 72 home games plus numerous concerts and events that the stadium hosts.

For this he has turned to the Hunter IMMS ET system. He says it is easy to use and it is scaled to a single-site operation like stadiums, parks and schools. "I think the best feature is the fact that it has an ET sensor on it," says Ralston. This evapotranspiration technology means he does not have to buy a weather station or pay for a service. Everything is on-site and acts as a weather station.

Ralston explains the system's ease of use was a factor in his purchase decision as well. "We have five clocks on site and it puts all five on them on one screen. I pick the start time and the computer does everything for me," he says. "It hasn't failed me. The grass is green and the fact that I'm saving 15 to 20 percent on water use means it's hard to go wrong." 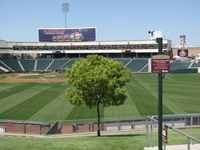