Apparently, the United States has not cornered the market on the lengthy building process. Americans have grown accustomed to political infighting, nuisance lawsuits, environmental impact surveys, and more, causing a typical two-year construction process to drag on.

The Swiss had a major project that was anything but a slam dunk, as well. 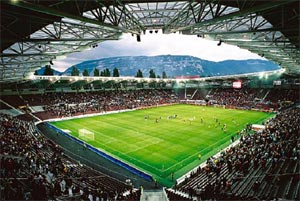 In Geneva, soccer fans grew impatient as the years passed. Switzerland’s pre-eminent metropolis had long wanted a soccer stadium whose stature would match that of the city. In the early 1990s, plans were unveiled to construct the Stade de Geneve, a world-class athletic facility that would make Genevans proud.

But eight full years of debate and bickering followed, as civic leaders could not agree on the exact design of the stadium and the entire scope of the project…which had grown to include more than just an arena for soccer.

Finally after the many years of quibbling, Genevans had to wait two more years for the actual construction to take place. But when all was said and done, the fans and the National League players of the Servette FC got something that all have agreed was well worth the wait.

More Than Fun and Games

Located in the La Praille district, Stade de Geneve is more than simply a sports facility. The main section features the playing field and seating area, with five levels and 30,000 covered seats. And while it is the cornerstone of the project, it is but one portion of it.

In addition to the playing arena, the massive project also includes a retail, dining and entertainment center equipped with underground parking, plus a major hotel, television studios, a commercial office complex, congressional chambers, and an Event Center.

The La Praille area is not far from the center of Geneva and thus the region will have a direct connection to the center city via the mass-transit RER system. The RER will make it easy for sports fans, shoppers, and businesspeople to get to and from Stade de Geneve. 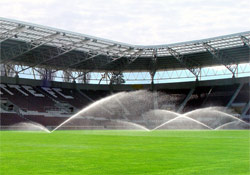 The construction of the Stade de Geneve was a complex undertaking, and the installation of the irrigation system was not an easy task. The stadium, which measures 105 meters long and 68 meters wide, is closed on all sides. Thus it was imperative to have a homogeneous irrigation system.

Typical systems in Switzerland, as well as in neighboring countries like Germany, use two central rotors and ten lateral rotors, which could not guarantee homogeneity. However, the maintenance personnel desired to be able to stop the watering on the corners—which, on soccer fields, often tends to be watered too much—and to be able to better manage the areas behind the goals.

To address these needs, the shorter sides of the stadium were equipped with Hunter G875-E-25-P8-S Electric Valve-in-Head rotors that can function on an individual basis.

Complementing these long throw rotors were five rows of five I-41 ADS and 36S-ON rotors, allowing every row to be operated by its own valve. An ICC-800-PL controller, with the addition of an 8-station ICM module, permits complete management of 15 zones—consisting of the 5 aforementioned valves, plus the 10 individual G875 rotors with their Electric Valve-in-Head design.

(Note: The ICC starts as a standard 8-station base unit, but can be customized to create a larger size controller—up to 48 stations—simply by adding 4- or 8-station ICM modules).

Originally known as the place that no one could agree upon, the magnificent new Stade de Geneve is now considered the place that everyone can agree upon. As players and fans, businesspeople and civic leaders, have all fallen in love with the Stade de Geneve’s spectacular architecture, wide array of facilities and offerings, and, of course…the beauty of the playing field’s turf.