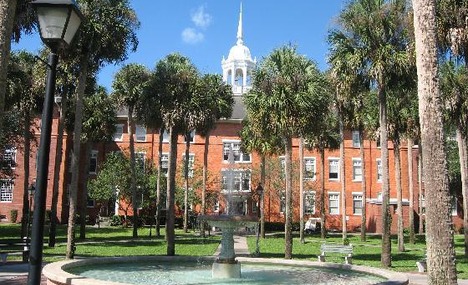 Florida's first private university, Stetson University, was founded in DeLand, Fla., in 1883, and today serves 3,700 students at two campuses and two satellite centers along the Interstate 4 corridor in Central Florida.

Stetson's 175-acre main campus in DeLand is an inviting blend of the old and the new. Traditional in style, brick architecture, large oaks, and sabal palms, are featured in the native Florida landscaping, complemented by winding walks and a grassy quadrangle with a sparkling fountain. Recognized in 1991 as a National Historic District, the campus possesses Florida's oldest collection of education-related buildings. At the same time, the university is always moving forward with new construction, additions and major renovations, including five new buildings that opened during its 125th anniversary year in 2008-2009.

Stetson considers the campus grounds to be an extension of its classrooms and a key component of the university's serious commitment to environmental responsibility.

Twenty years ago, 189 16-foot live oak trees were planted on Stetson's grounds as part of a plan to restore and maintain a forested atmosphere on campus. Today, environmental issues are more important than ever at Stetson. The university began a Native Plant Initiative in 2002, which calls for use of only Florida native trees, shrubs, and flowers in campus landscaping. Once established, native plants require less water for irrigation than non-native landscaping. In 2007, Stetson added the expansive Vera Lea Rinker Native Plant Garden, considered one of the best examples of native landscaping in Central Florida. The campus's evolving native-plant landscape functions as a living laboratory rich in educational and research opportunities in the environmental sciences. 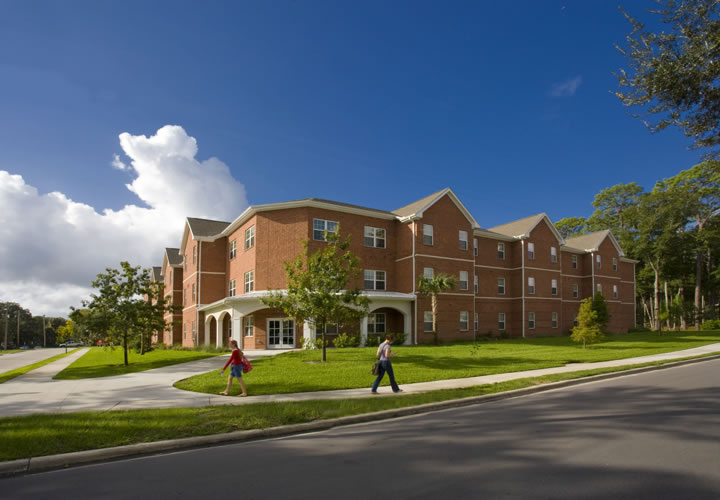 Stetson's partnership with Hunter for campus beautification and water conservation began nearly 30 years ago, said David Rigsby, Stetson's manager for streets and grounds and senior assistant for special projects. In the early days, the Facilities Department organized a day-long conference for the grounds staff to learn more about grounds maintenance and landscaping from environmental experts and industry vendors. In preparation for the conference, Rigsby called Hunter's corporate office to ask the company to participate. A man answered the phone, and he responded enthusiastically and set the arrangements in motion. It turns out that man was Ed Hunter, president of the company, and Rigsby has never forgotten his service and commitment to the customer.

"He could have put me off to someone else," Rigsby said. "But he made sure we were covered. They sent us representatives who taught our people about irrigation and water conservation."

Over the years, Stetson and the landscape architecture firm Bellomo-Herbert have worked with Hunter Specification Manager Brian Walker and Hunter's local supplier, Central Pump and Supply in Orange City, Fla., to select the right rotors and sprays and time clocks for each part of the university's grounds, whether an athletic field, landscaping around a building, or a formal garden.

One of the primary goals, Rigsby said, is to conserve water in keeping with Stetson's commitment to environmental responsibility and state regulations on water consumption. Stetson uses no domestic water for irrigation purposes; about 90 percent of its irrigation is done with reclaimed water that was brought to campus in the 1990s in partnership with the city of DeLand. So it's important to the university that Hunter regularly redesigns and improves its irrigation sprays to deliver the best grounds coverage with the least amount of water possible. Stetson is now planning to add new Hunter controllers that will automatically read the soil and shut irrigation systems down if watering is not needed on a particular day.

"There's only so much water out there," Rigsby said. "In higher education, we're in a leadership role and we need to set the example of being good stewards of the environment. This is one way we do it." 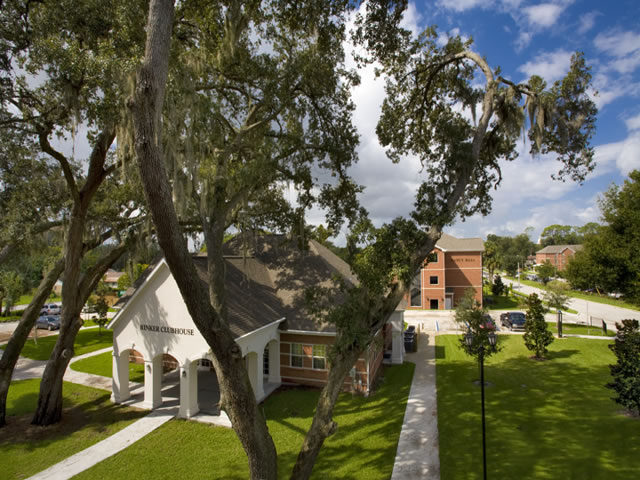 In recent years, one of the best examples of Stetson's Native Plant Initiative and the design, planning, and coordination with Hunter that goes into a big campus landscaping project is the university's Vera Lea Rinker Native Plant Garden. Located at the President's House, the two-acre landscape illustrates principles of environmental sustainability while serving multiple audiences. The garden has environmental, educational and aesthetic roles, and also functions as a private garden and public entertainment space for the university president. The Rinker Garden raised Stetson's Native Plant Initiative to the next level and increased its visibility to the wider public.

The garden is named after the late Vera Lea Rinker, the mother of John Rinker, president of the philanthropic Marshall and Vera Lea Rinker Foundation whose generous donation funded the garden's creation.

Landscape installation took place May through August in 2007, and the garden was formally dedicated on April 4, 2008. The design features thousands of Florida native trees, shrubs, flowering plants, and wildflowers. The flora is labeled to help with identification. Examples of plant material include magnolia, maple, birch, redbud, dogwood, fringe, and palm trees, as well as shrubs and other greenery such as Florida anise, St. Johns wort, native Florida lantana, Fakahatchee grass, and coontie.

The Rinker Garden illustrates the message that Stetson fosters landscape values based on access to a healthy and sustainable environment. Native plants are beneficial to wildlife and enhance biodiversity. They require less water, fertilizer, and pesticides than other, non-native ornamental plants because native plants are adapted to their location and climate.

Reclaimed water is used for irrigation in the garden. Reclaimed water lines were extended east to west, across Woodland Boulevard (U.S. Highway 17-92), for the project. The lawn areas (zoysia grass) are heavily used during public and private events, and must withstand foot traffic and placement of tents and tables while remaining healthy and aesthetically pleasing. The garden's lawn areas are Grand Lawn, south of the porch (120 feet by 40 feet); Lawn Area, west of the Grand Lawn (94 feet by 80 feet); and Pavilion Area, south of pavilion (40 feet by 30 feet).

University faculty and students planted the first native plant garden on university grounds in the late 1990s at Gillespie Museum. Then President Doug Lee, who is now Stetson's chancellor, soon after implemented a policy of using only Florida native trees and shrubs in all university landscaping. The Board of Trustees formally adopted the Native Plant Initiative in the 2002-2003 academic year. The Native Plant Initiative reflects the university's commitment to environmental responsibility, one of Stetson's seven core values.

The transformation of campus grounds is being done gradually as new landscapes are created and existing ones renovated. New construction and major renovations in recent years have provided multiple opportunities for native landscaping and new irrigation projects. A complete renovation of the Eugene M. and Christine Lynn Business Center was completed in 2002 using native landscaping. Home to Stetson's School of Business Administration, the Lynn Business Center was the first LEED-certified green building in Florida. Six new student residences opened in fall 2007, including five apartment-style buildings.

Five new buildings opened on the DeLand campus during the 2008-2009 academic year, including the new Science Center, the Homer and Dolly Hand Art Center, the Marshall and Vera Lea Rinker Environmental Learning Center, a new field house at the Patricia Wilson Field softball complex and the Mary B. McMahan Hall for the School of Music.

Last fall, Stetson's Patricia Wilson Field softball complex was named the 2008 Sports Turf Managers Association (STMA) Softball Field of the Year. The award was the latest in a string of honors for the complex, which was selected National Field of the Year by the National Fastpitch Coaches Association in both 2004 and 2007. The softball complex features Hunter irrigation.

"We feel extremely honored to be recognized for all the hard work we do here in maintaining this beautiful facility," Softball Head Coach Frank Griffin said. "Our philosophy is to stay on top of everything and take preventative measures rather than reacting to problems after the damage is done. For example, we know what time of year to expect various pests, and we constantly check the grounds for fungi and other diseases."

"I'm proud to win this award and I have to give the credit to everyone on this staff," said Field Maintenance Technician George Marshall. "Between Frank, myself, (Associate Head Coach) Vanessa (Bataille) and (Assistant Coach) J.J. (Payette) we have a great team here to work with that makes the job easier."

A panel of seven judges from the Sports Turf Managers Association independently scored each entry based on the playability and appearances of the playing surfaces, innovative solutions employed, effective use of budget and the development and implementation of a comprehensive, sound agronomic program.

The National Field of the Year awards given by the National Fastpitch Coaches Association were based on the overall quality of the playing surface and dugouts as well as additions and renovations that had been made to the complex. Patricia Wilson Field was also named a regional winner in 2003.