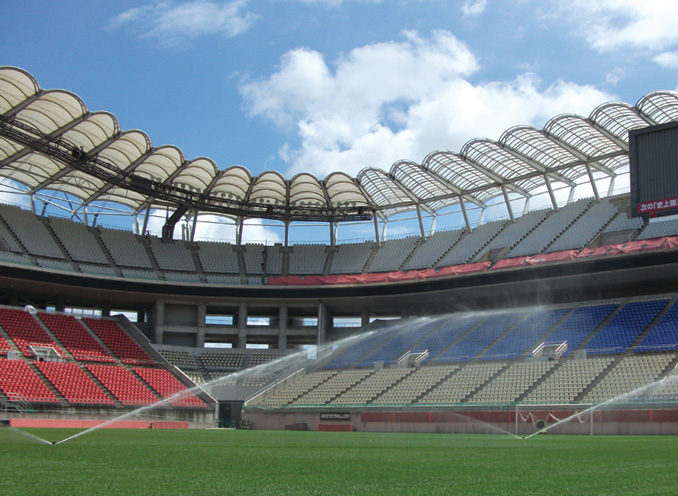 The Kashima soccer stadium of Ibaraki Prefecture is one of the largest athletic sports fields in the Northeastern region of Japan. Located in Kashima City, this stadium is home to the Japanese (J-League) professional soccer team, the Kashima Antlers. It holds a capacity crowd of over 40,000, and boasts a beautifully sleek architecture.

The Antlers and Kashima Stadium have represented the J-League since its inception in 1993. As the J-League’s most successful team, the Antlers have recorded numerous historic victories in the stadium, and provided fans with countless thrilling moments. Their third straight championship in 2009 solidified the Antlers in the Japanese football record books as the only team to three-peat in league history.

A mainstay for avid J-League soccer fans, Kashima stadium regularly hosts Kashima Antler matches as well as numerous Asian Champions League games. While the stadium was well known in Japan since it was constructed in the early 1990s, it gained worldwide notoriety following the 2001 FIFA Confederations Cup and 2002 World Cup. As a World Cup venue, the Kashima stadium was elevated to an elite status among stadiums. Because of this global exposure, millions of viewers worldwide were able to enjoy the beauty of not only the games being played, but also the field itself.

Among J-League stadiums, the Kashima Stadium was the first to introduce a modern irrigation system. In order to make sure the Kashima field always plays at an elite World Cup level, field officials felt the need to upgrade their system to the best available products. The company they selected to keep the field’s turf healthy and green was Globen Co., Ltd.

After thoroughly reviewing the needs of the stadium and the design of the field, Globen realized that the Kashima field was simply too large for the products that were in use at the time. As an advanced solution, Globen suggested Hunter Industries’ I-90 long distance rotors. The Hunter I-90 models boast a radius of up to 31 meters and were designed to meet the specific needs of large-turf areas such as sports fields, parks, and public areas. With eight color-coded nozzle options, a heavy-duty gear-drive, a water-activated riser seal, and a “jar-top” body cap that allows quick access to the filter screen, the I-90 has proven to be an efficient and highly durable long distance watering solution at countless sites around the world.

In addition, Globen coupled the installation of the I-90 rotors with Turf Cup Kits, which accommodate a plug of living turf on top of the riser, so the sprinkler is out of sight to both fans and players when retracted. Turf Cup Kits also help improve field safety by greatly reducing the chance that a player will ever come into contact with a rotor. Even stadium officials who know the field layout inside and out admit that it is difficult to view the sprinkler locations due to the quality coverage the Turf Cup Kits provide.

Using a specification plan that included 12 adjustable-arc and eight full-circle I-90s, the field experienced maximum health and ease-of-maintenance after the switch.

Sadly, just when the field was looking and playing its best, the Great East Japan Earthquake hit Kashima Stadium with full force in March 2011. The damage caused by the quake resulted in the suspension of games and events at the stadium for several months.

Thanks to the tireless efforts and perseverance of local officials and many dedicated workers, Kashima stadium has since been repaired and restored to its former condition, and is hosting J-League soccer matches without issue. More importantly the landmark stadium serves as a beacon of hope and encouragement for the thousands of earthquake and tsunami victims rebuilding their lives in Japan.