What to do when Neighboring Development Leads to Low Water Pressure? MP Retrofit! 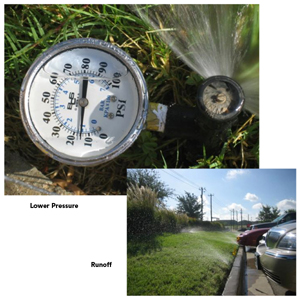 When the area around the Dell Corporate Campus began getting heavily developed with new construction, its irrigation system began experiencing low water pressure. This is a common occurrence in developing areas, because the flow of water to a particular system decreases as more buildings draw from a shared main water source. Because of this change in pressure, the traditional nozzles that most pop up sprinklers use aren't able to correctly distribute water, and both the health and the appearance of areas needing irrigation become aversely affected. Dell's case was no different, and after a sustained period of being irrigated with the wrong water pressure, grass, trees, and flower plants all over the grounds began to brown and wither to an alarming degree.

One lawn area on the campus looked particularly bad because of the looming low-pressure problem. Water was not reaching all of the grass it was supposed to, because the traditional nozzles simply couldn't push it far enough. Hunter's MP Rotators are designed to create proper water distribution even with low-pressure situations, because they disperse water in a slower, more unified fashion. This particular instance at Dell seemed like a great opportunity to test the MP's low-pressure performance in comparison to traditional nozzles. To perform the comparison, the particularly bad area was tested for operating pressure and then retrofitted with MP Rotators, and re-tested. After a sustained period of use with MP Rotators, the appearance and health of the landscape before and after the retrofit was also observed.

While operating with traditional spray nozzles, the system was found to have a pressure of 15 PSI, which is well below the ideal operating pressure of 30 PSI. After installing MP Rotators, the system was found to be operating at just below 50 PSI, which allowed the water to reach all of the areas it was designed to reach, and also dispersed the water more evenly throughout the soil. With MP Rotators now installed wherever appropriate throughout the grounds, Dell's campus has returned to its status as one of the most beautiful, prestigious such complexes in the world. 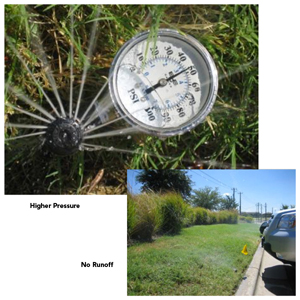