"New York, New York, it's a wonderful town. The Bronx is up and the Battery's down…" 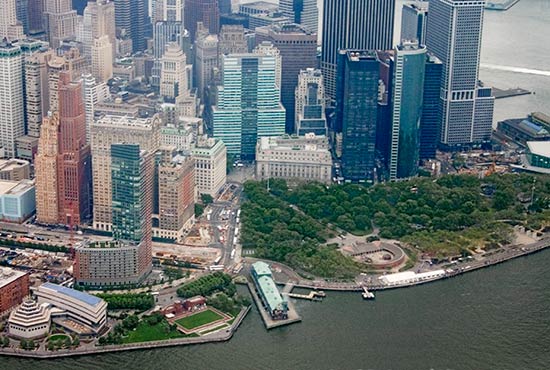 As America listened to the sailors on leave in the movie musical "On the Town" sing about the Big Apple, those who had never been to the city probably had a good idea about what The Bronx was. With the world famous Bronx Zoo and baseball's New York Yankees ("The Bronx Bombers"), this northernmost borough of New York City had no identity crisis.

But what in the heck is the Battery?

Oh, and what does this have to do with Hunter?

The Gateway to New York

Forget that New York is actually comprised of five boroughs. When most people picture New York, it's Manhattan they're thinking of. And the photographic image that usually comes to mind is the sweeping panorama of the skyscrapers viewed from the Harbor, with the Statue of Liberty in the foreground.

Before the big buildings rise to form the city skyline, at the southernmost tip of Manhattan, there lies an open area that gives the crowded city a chance to breathe before the land meets the water. This is the Battery. 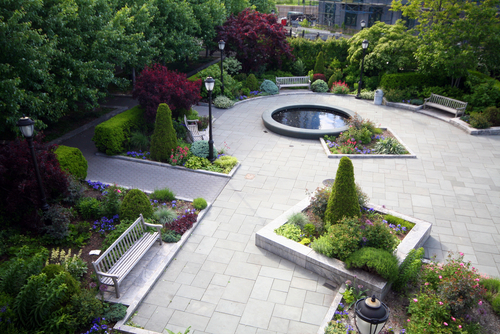 And this is where Hunter came to the rescue for the irrigation needs of a showcased piece of land in one of New York's grandest redevelopment projects. In 1996, Robert F. Wagner Park opened at the tip of the tip of Manhattan, right on the waterfront of the Battery. Due to its prominent location, Wagner Park would be one of the most visible parts of the greater Battery Park City project. It's location would also make it the most vulnerable to one of irrigation's most dreaded enemies – wind.

Because the tip of Manhattan Island juts into New York Bay, the area around Battery Park faces the constant battering of strong winds, making irrigation a challenge. Hunter I-20 Ultra rotors provided the solution. Hunter's upgraded rotor for commercial projects, the I-20 comes with a full rack of 8 standard and 4 low angle nozzles. All 12 of the nozzles deliver honest performance and superior close-in coverage for a complete range of different landscape conditions. In addition, heavy duty features such as a rugged body cap, extra-strong spring with reliable retraction and an optional stainless steel body furnish the I-20 with exceptionally strong construction and make this rotor virtually vandal-resistant (and the perfect choice for public sites like this). More than 100 Hunter I-20s were installed at the Battery's parks and public spaces, the vast majority of the rotors using low angle nozzles to provide superior coverage in an environment buffeted by winds off the bay.

A Little Bit of History

Here's a question fit for "Who Wants to Be a Millionaire?": how did the Battery get its name? The answer: the land was originally an open area reserved for the batteries of cannon used to protect the city – first by the Dutch, later by the English and eventually by Americans.

Giovanni de Verrazano was the first European to explore the region. Famed English explorer Henry Hudson sailed through the area. But it was the Dutch who were the first to actively settle here, displacing the native Algonquin speaking people. In 1624, the town of New Amsterdam was established on the lower third of the island of Manhattan, after Peter Minuit supposedly bought the island from the native inhabitants for about $24 (roughly the cost of an I-20 rotor) worth of beads, trinkets and other assorted items.

The Dutch developed a thriving community, Holland's preeminent foothold in the New World and one of the most vibrant colonies under any flag in the 17th Century Western Hemisphere. Yet, only four decades later, in 1664, the English, seeing the potential that the growing new city held for the future, seized the colony and renamed it New York.

New York continued to prosper under the British Crown and the lower tip of Manhattan – a prized piece of real estate given its locale as the gateway to the city – had begun to develop as well. With that in mind, in 1734, the New York Common Council restricted the future development of the Battery when it resolved that, in order to keep the locations of harbor defenses clear, "no manner of Houses or Other Edifices whatever" should be built along the shore from what is present day State Street to Battery Park.

New York was made the first capital of both New York State and the United States in 1784, a distinction which stimulated improvements to the city's parks, especially Battery Park. Trees were planted along its sea wall, fences built, and the shoreline was extended through landfill. Open access to the waterfront and magnificent harbor views made the Battery New Yorkers' favorite spot for an afternoon stroll or an evening promenade. In fact, George Washington mentions frequent walks "round the Battery" in the diaries he kept during his residence in New York at this time.

A Plan for the Future 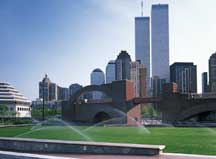 A 92-acre landfill to extend the size and scope of the revitalization project was finally completed in 1976. However, due to New York's fiscal crisis, development stopped in 1977 and construction did not begin on Battery Park City's first residential development (Gateway Plaza) until 1980. The first section of the 1.2 mile Esplanade – the majestic shoreline walkway that circles through the project – was completed and opened to the public in 1983.

In 1996, Robert F. Wagner Jr. Park opened and that is where Hunter comes in to the picture. Here, as well as at Rockefeller Park, the Museum of Jewish Heritage and numerous other sites throughout the Battery Park City project, Hunter rotors were chosen to help make the "Gateway to New York" a lush green welcome mat spread out at the door of Manhattan.