The NODE is compatible with the Hunter Clik rain sensors including Mini-Clik® and Rain-Clik®, as well as many other interrupt type devices/sensors that do not require power. Simply connect the sensor to the NODE controller by cutting the yellow wire loop and connecting to the sensor wires.

NOTE: NODE is not compatible with Hunter Solar Sync, Wireless Rain-Clik® or other weather devices that require 24VAC power.

icon will show on the display. 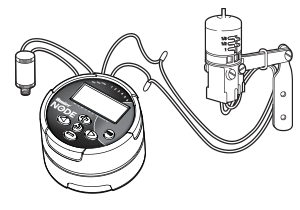